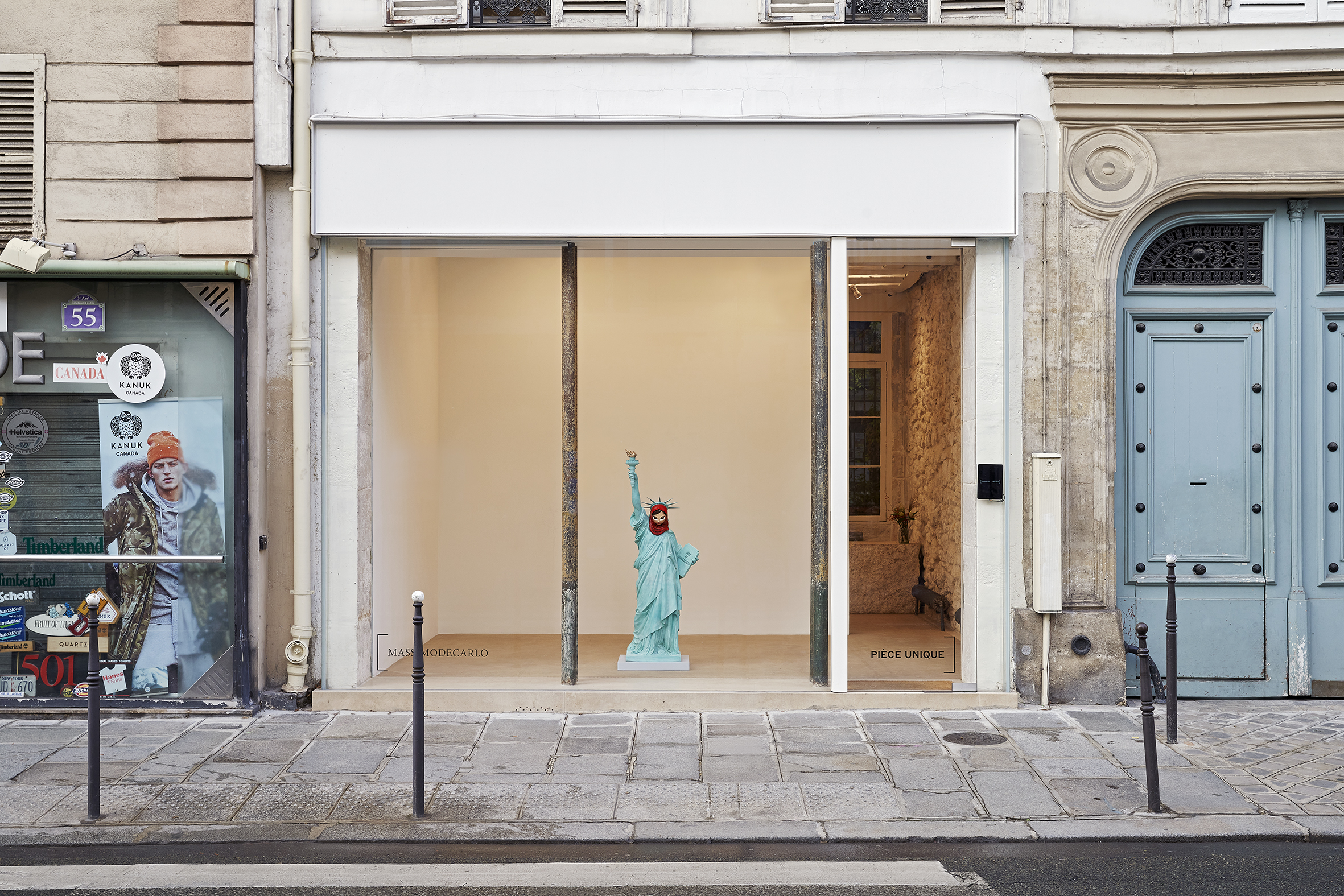 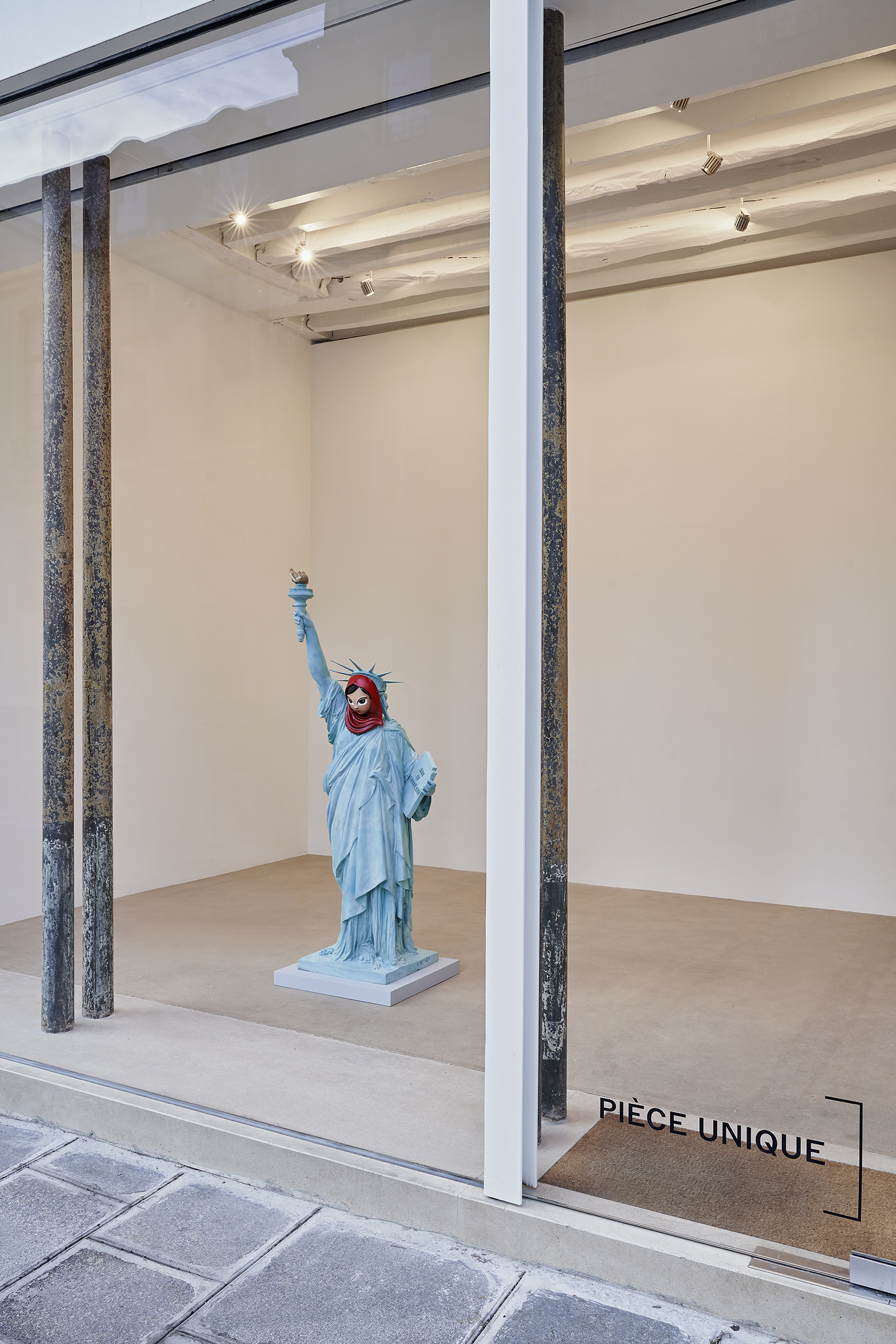 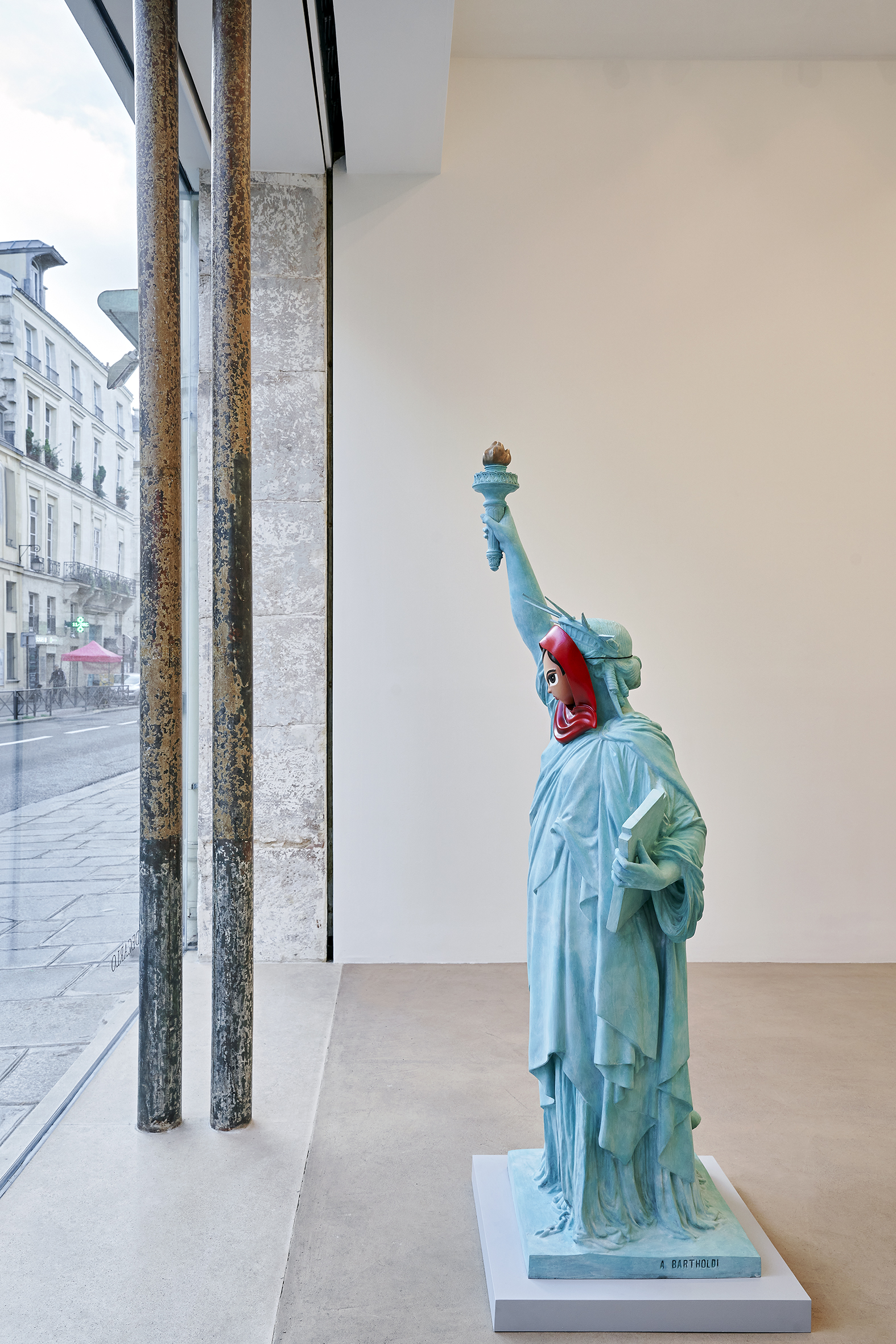 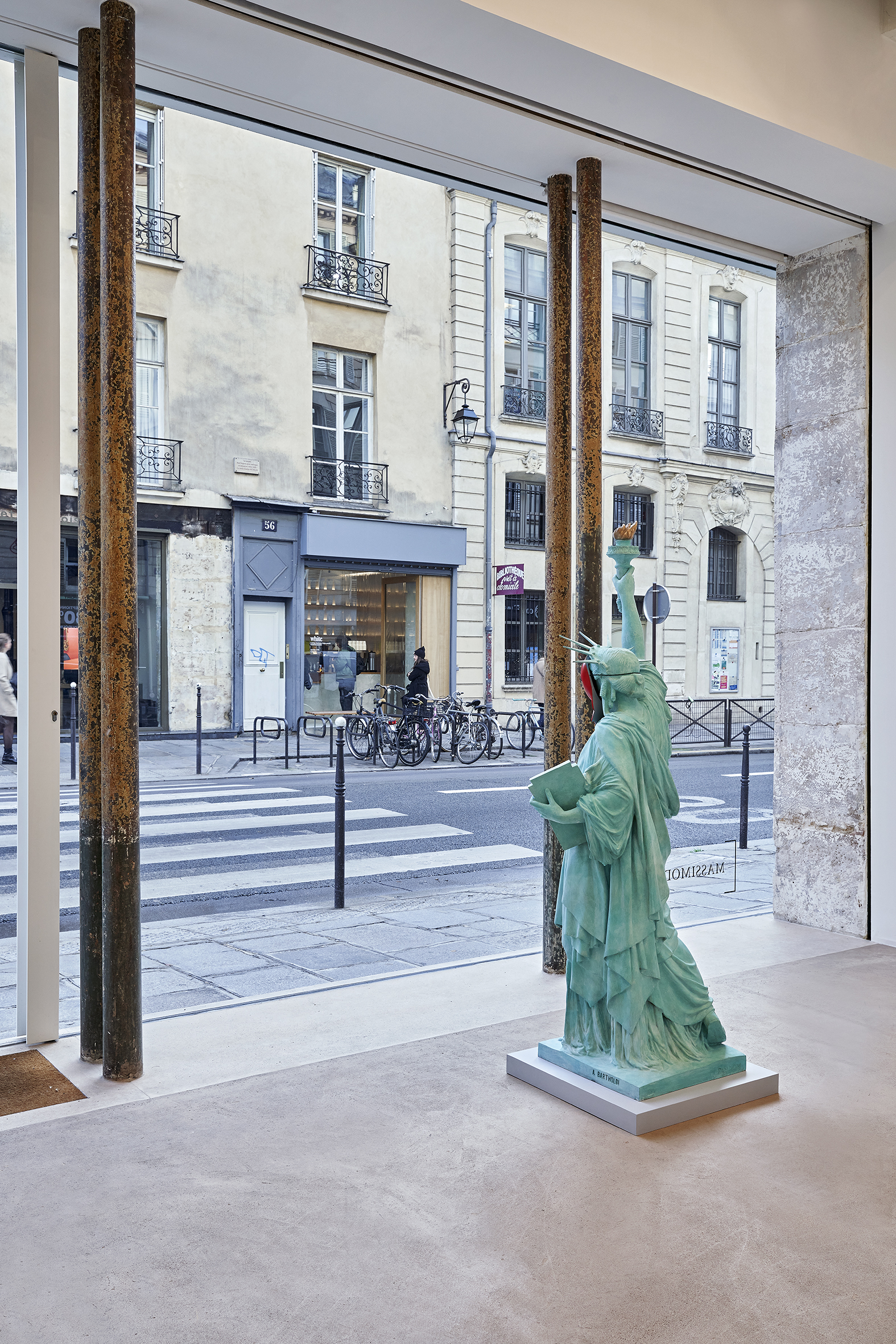 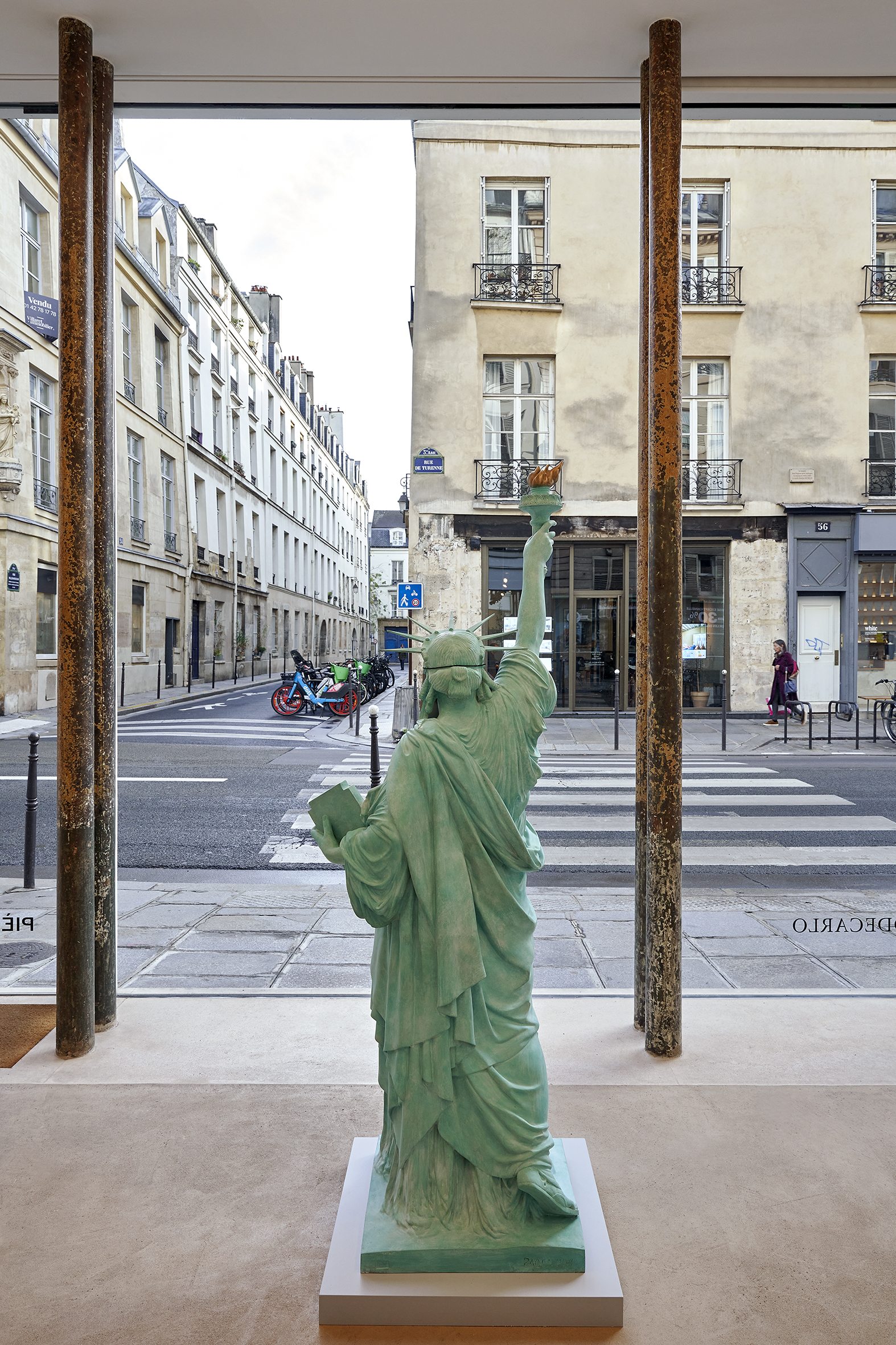 One of my favorite places on the High Line is a small grove of maple trees growing through the wooden floor of the park’s Tenth Avenue Square. In the summer, when the tree canopy is full and lush, the grove feels like a hiding spot, just barely removed from the eponymous Tenth Avenue. Through the leaves and branches, one can glimpse a surprising view above the rushing traffic below: the Statue of Liberty, a silhouette backed by the low shadow of Staten Island. Since 1886, the statue has stood in New York Harbor on its high pedestal, welcoming hopeful newcomers, maritime workers, and visitors and tourists, to the waterways of the Hudson and East Rivers.

Today, along this same view stands a second Statue of Liberty—a double of the Lady Liberty in New York Harbor—standing 5 meters tall to the original’s 93 meters, and 7 kilometers closer. This is Paola Pivi’s You know who I am, a sculpture commissioned by High Line Art, the public art program presented on and around the High Line. Paola’s statue wears a cartoonish mask, a stylized portrait of an individual whose personal experience of freedom is directly connected to the US. Several masks alternate on the statue, swapped every few weeks, and each representing an individual whose story is explained on a sign near the sculpture and on High Line Art’s website. The artwork began with Paola’s own connection to the Statue of Liberty, as a mother looking for a way to bring her son home. Paola’s son Norbu adopted her and her husband Karma when they were in India in 2012, after a sudden and emotional first chance meeting. After four exhausting years of legal battles, finally, Norbu, Paola, and Karma were able to return to their home in Anchorage, Alaska. Throughout this time, the Statue of Liberty remained a beacon for Norbu, a symbol of the freedom and possibility he could find in the US. The first mask on the statue at its inauguration was a cheerful portrait of Norbu.

For some Americans born in the US and accustomed to news cycles about the country’s horrendous immigration conditions, it can be difficult to believe stories about the US as a beacon of hope and freedom. We hear many versions of this story that are broken promises, lies never intended to be made good on. And yet, in this artwork, Paola Pivi opens up a place for these stories to be told one by one, outside of the news, by individuals each telling their unique story. On Pivi’s artwork at Pièce Unique, and on the High Line from October – December 2022, is the portrait Mahnaz Akbari, a woman who came from Kabul, Afghanistan to the US in August 2021, during the US military’s withdrawal from Afghanistan. Despite having worked alongside the US military for ten years, Mahnaz is still in the process of applying for asylum to be able to stay in the US. Her story is one of impossible decisions and dreams put on pause, of the bureaucratic loopholes that expand into indefinite waiting and uncertainty for thousands of people. Mahnaz’s story is included below, as well as in an audio interview at the link here or via the QR code below.

The Statue of Liberty itself is a story of doubles, of multiples, and of shifting identities. Its sculptor, Frédéric Auguste Bartholdi, originally planned the sculpture for the entrance to the Suez Canal in Egypt. After the project was canceled due to insufficient funding, Bartholdi transformed the robed peasant woman of Egypt Carrying the Light to Asia into Liberty Enlightening the World, the gift from France to the US now known as the Statue of Liberty. Bartholdi created multiple studies for the work, and even shipped fragments of the statue to New York City be displayed in public to raise funds for its final realization. And now, walking down Canal Street, Times Square, or another other busy tourist hub in New York City, you see countless copies of the statue, in miniatures, t-shirts, keychains, magnets, snow globes, foam crowns, and more.

The Statue of Liberty is always multiple, in its origins, its reproduction, and as a circulating symbol that has come to represent the city of New York as a whole. In her project, Paola Pivi taps into the potential of this multiplicity to imagine that any one of us could be the Statue of Liberty, and to invite Norbu, Marco Saavedra, Mahnaz Akbari, and many others to share their portraits and their stories through her image. 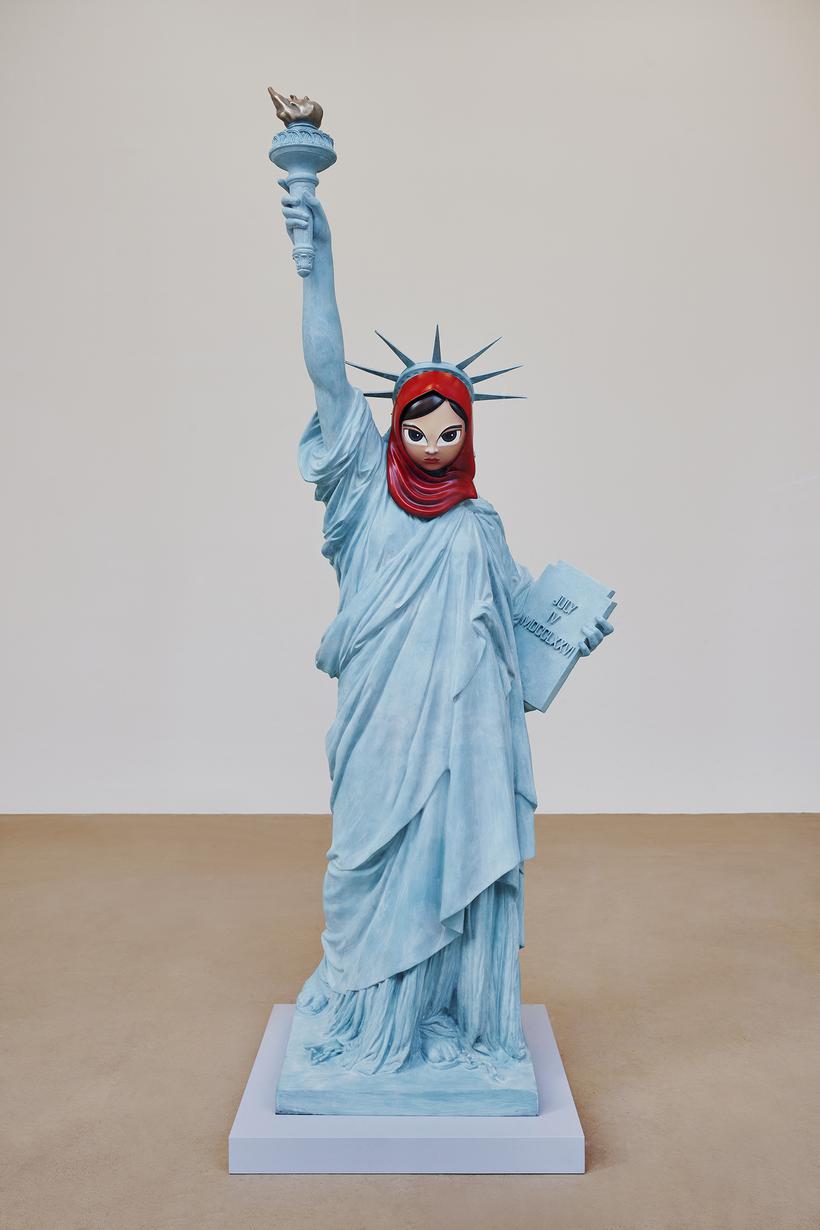