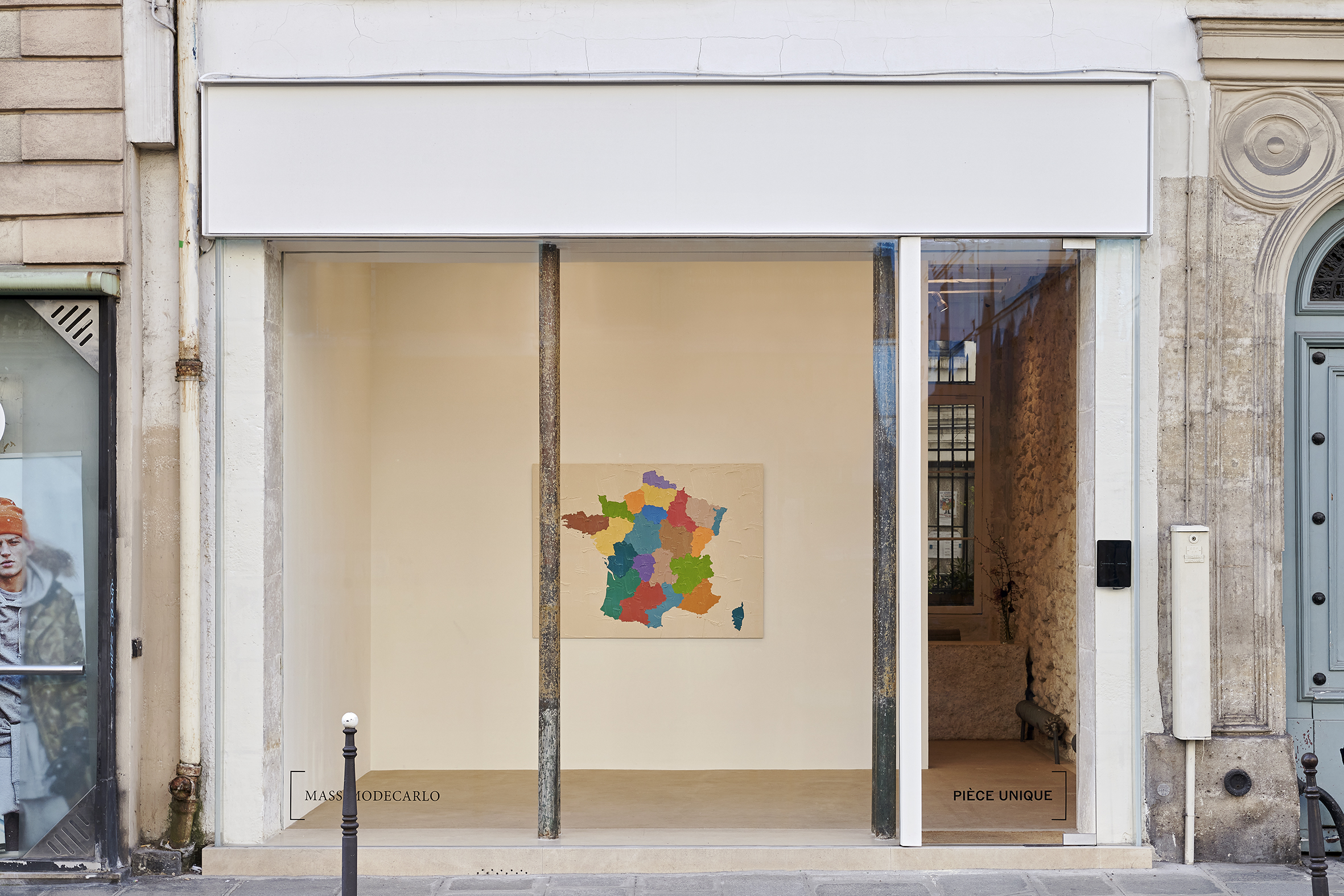 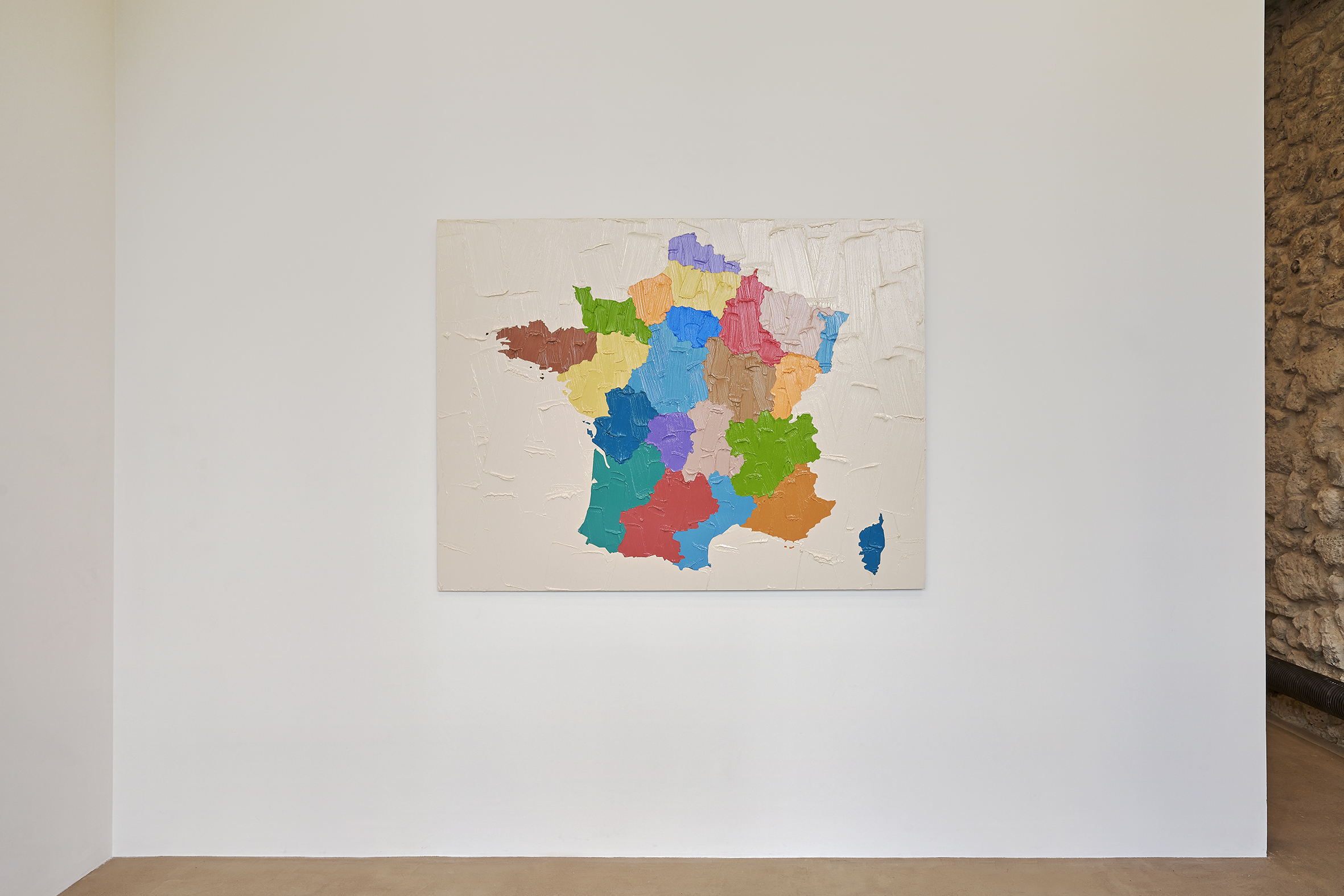 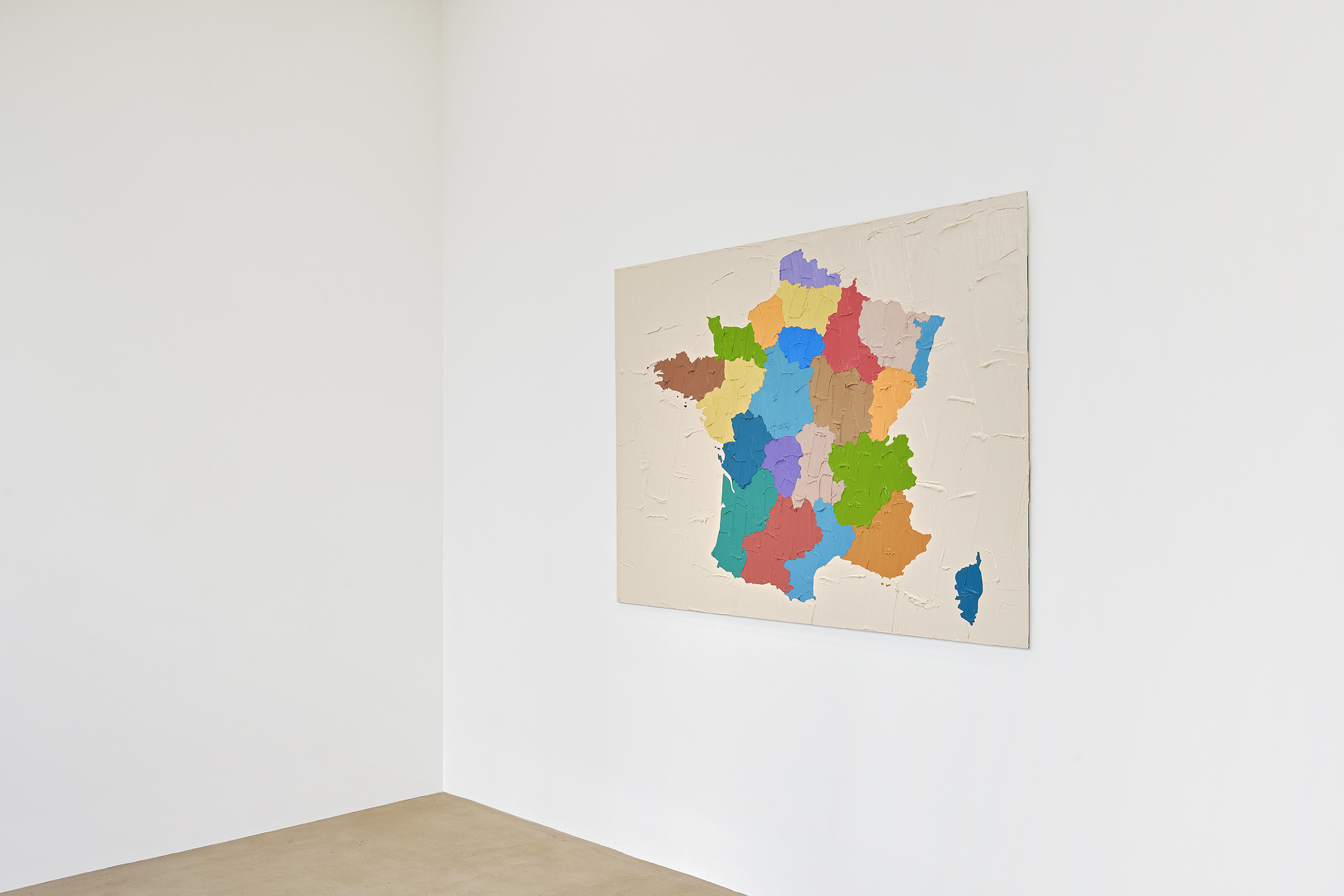 Deleuze & Guattari, before Michel Houellebecq, showed how the map, insofar as it is “constructed, always dismountable, connectable, reversible, modifiable” can only be distinguished - even opposed to territories. The map is indeed a tool of power that allows all manipulations of territorial and spatial realities. This cartographic relationship between power and the imaginary obviously interested artists of the 20th Century. I am thinking here of Marcel Broodthaers and his Atlas for the use of artists and soldiers; the world maps of Alighiero Boetti; of Art & Language’s Map to Not Indicate; of those, more disturbing, painted on mattresses by Guillermo Kuitca; but also, further on, of the surrealist map of the world and the maps of situationist excesses…

Jeu de Carte (Card Game) that Bertrand Lavier produced today, is a work that starts from another perspective; it is a clear nod to Map painted by Jasper Johns in 1961, based on a blank map of the United States intended for coloring given to him a year earlier by Robert Rauschenberg. Like Johns, Lavier starts from a "ready-made" model, in this case a mute map of France intended for schools and which represents the French regional division before 2015 (until that year, and since 1981, France had 22 metropolitan regions and 4 overseas regions). The particularity of this map is that the 22 regions each have a specific color, i.e. 22 hues which constitute a way of coring the chromatic circle. Jasper Johns used the map of the United States as pictorial support, with each different way of painting referring explicitly to the touch of abstract expressionism. While Johns found a malicious pleasure in not letting the colored areas coincide with the outlines of the States, Bertrand Lavier, for his part, uses the map of France as a score that allows him to bring into play the method that governs its painted objects, namely to develop “a painting which covers exactly what it speaks of”.

Thus the 22 fragments constituting the administrative division of the French regions are systematically covered with the same color as those on the map, using a touch that Bertrand Lavier describes ironically as the “Van Gogh touch”. The operation, as tautological as it may seem, nevertheless constitutes a polychrome and

shimmering picture that transforms a map of France into a pictorial object. The passage from the map to the board, in this case, is not so innocent. Jeu de Carte by Lavier is reminiscent, mutatis mutandis, of the Table of France that Michelet drew up in 1875 as an introduction to his History of France. Because the colorful object of Bourgogne-born Bertrand Lavier is not far from the wonders of Picardie crossed with Ardennes native Jules Michelet in front of the colorful spectacle of a country considered as an organism where the most contradictory styles and temperaments coexist:

“It is a great and marvelous spectacle to gaze from the center to the extremities, and to take in this vast and powerful organism where the various parts are so skillfully brought together, opposed, associated, the weak with the strong, the negative to positive; to see the eloquent and vinous Burgundy between the ironic naivety of Champagne and the critical, polemical, warlike harshness of Franche-Comté and Lorraine; to see the Languedocian fanaticism between Provençal levity and Gascon indifference; to see the lust, the conquering spirit of Normandy contained between the resistant Brittany and the thick and massive Flanders.”

That this Jeu de Carte by Bertrand Lavier be presented in the 50 sqm of the MASSIMODECARLO Pièce Unique gallery at 57 rue de Turenne from March 22nd to April 2nd, a few weeks before the 2022 French presidential election can only be the fruit of the most subjective coincidence. 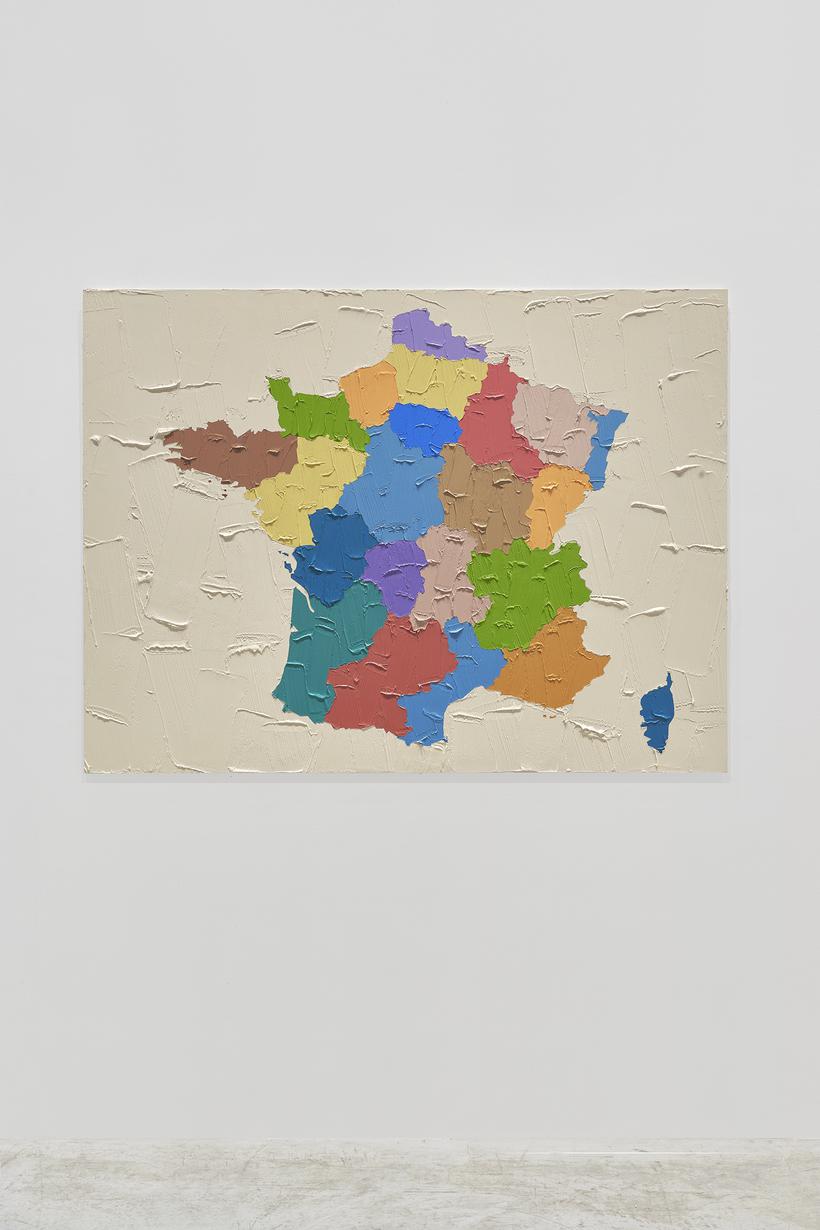