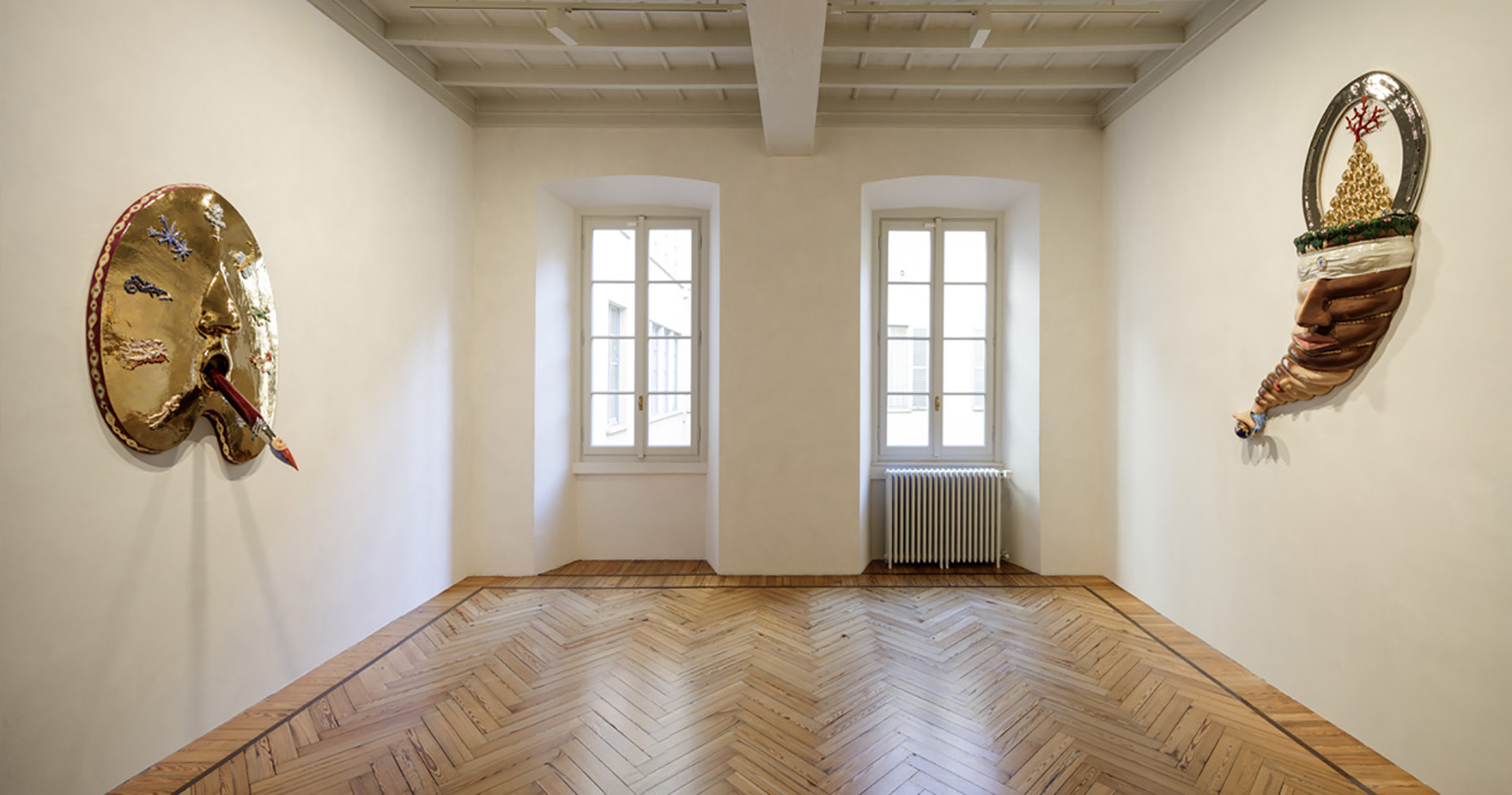 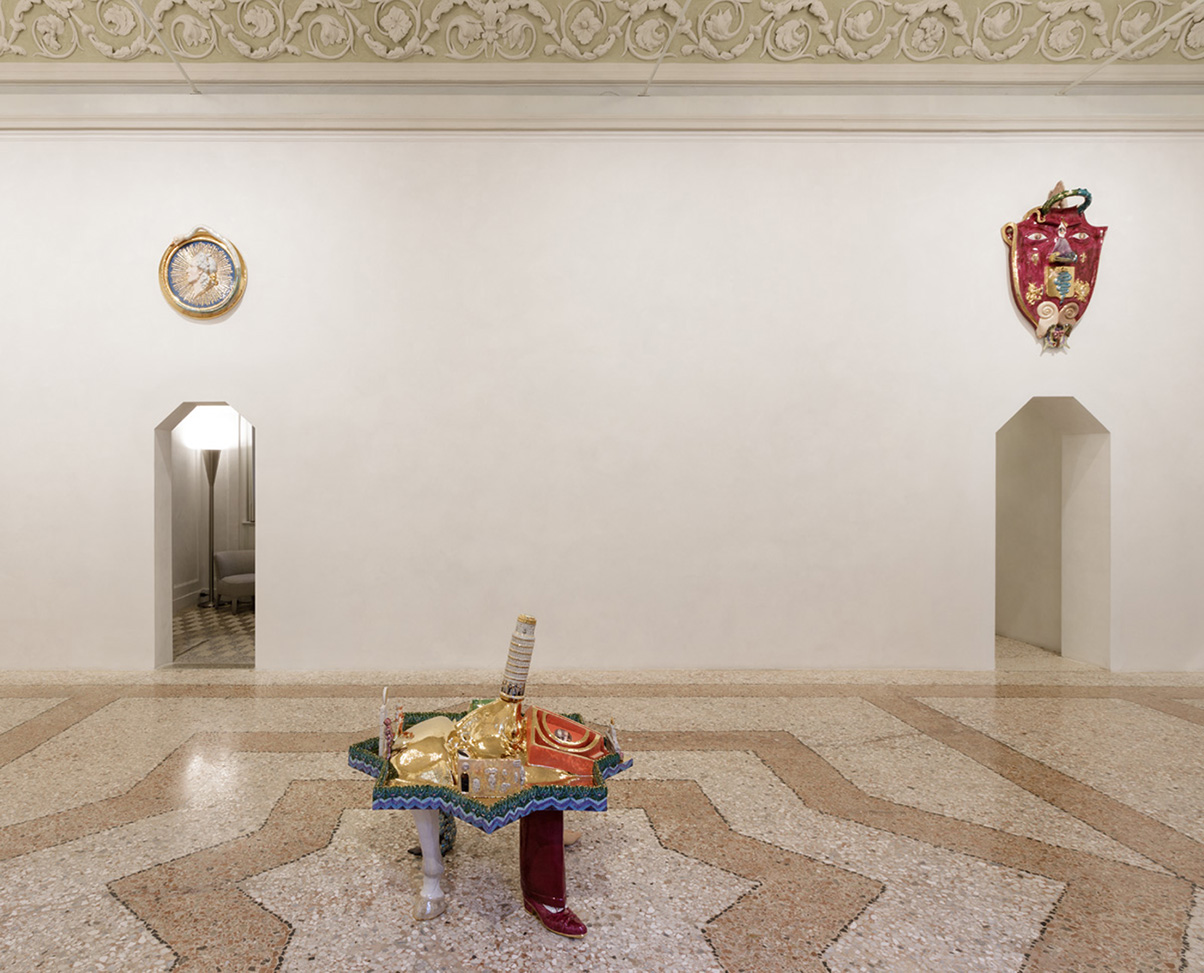 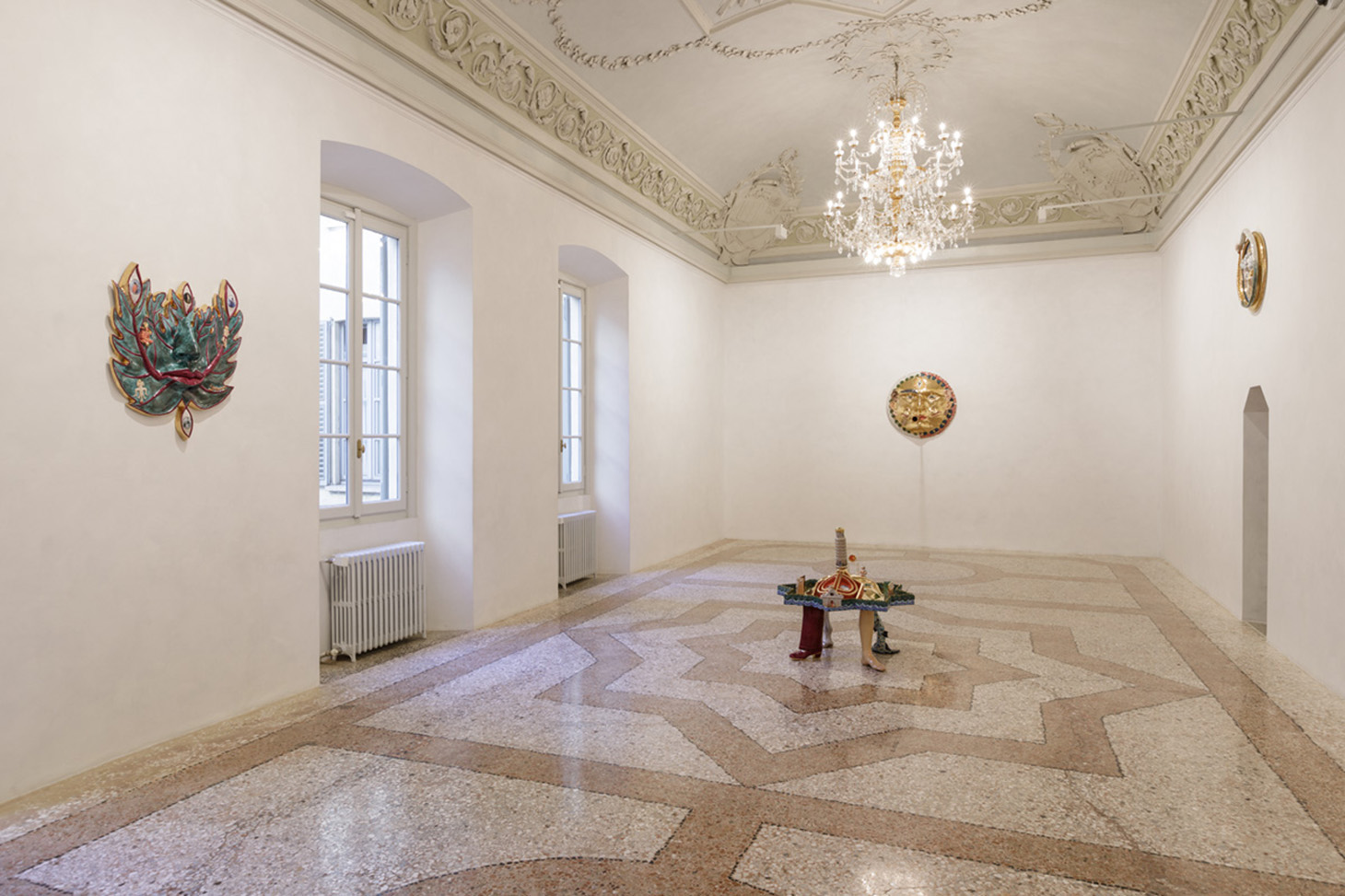 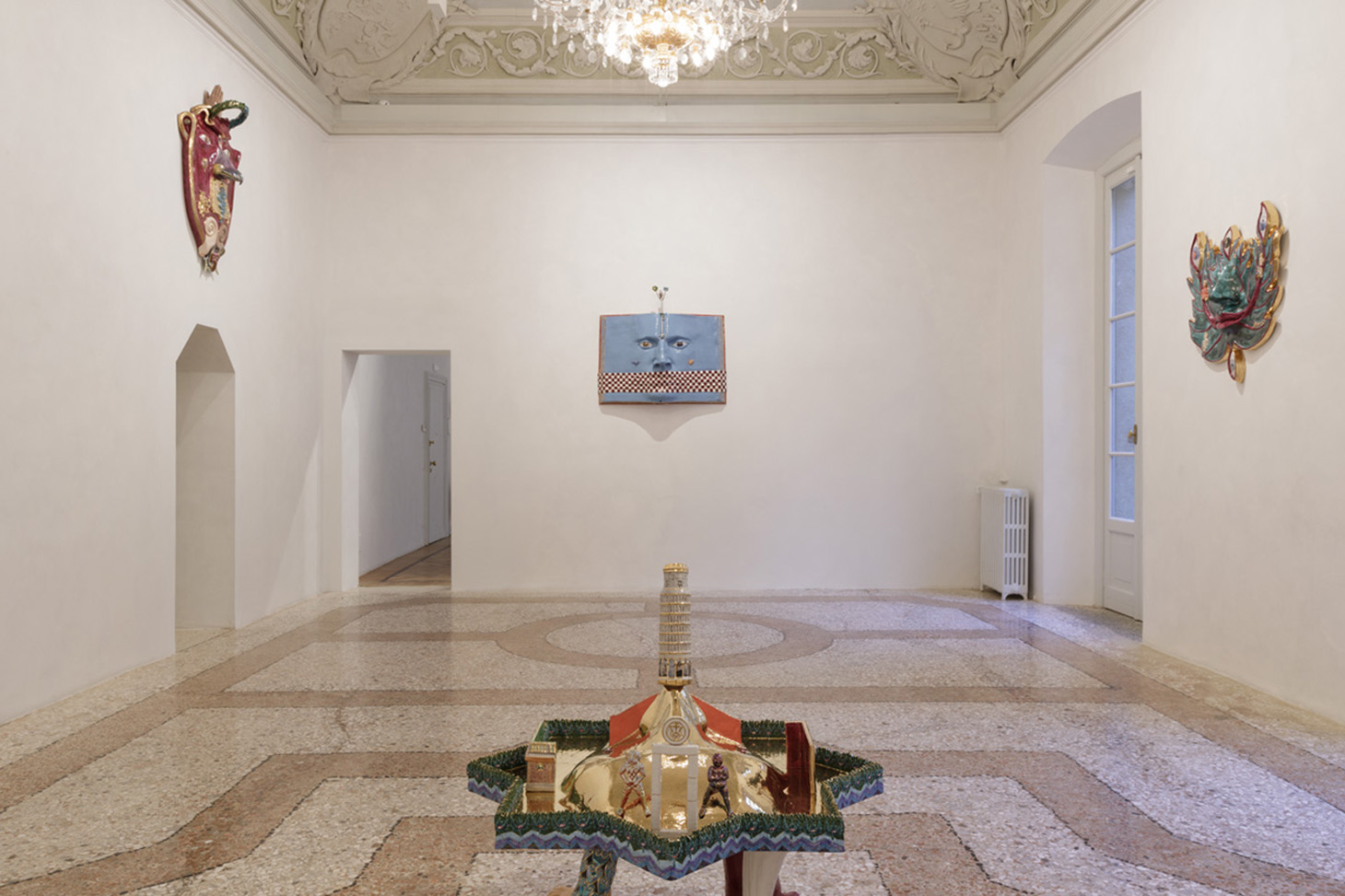 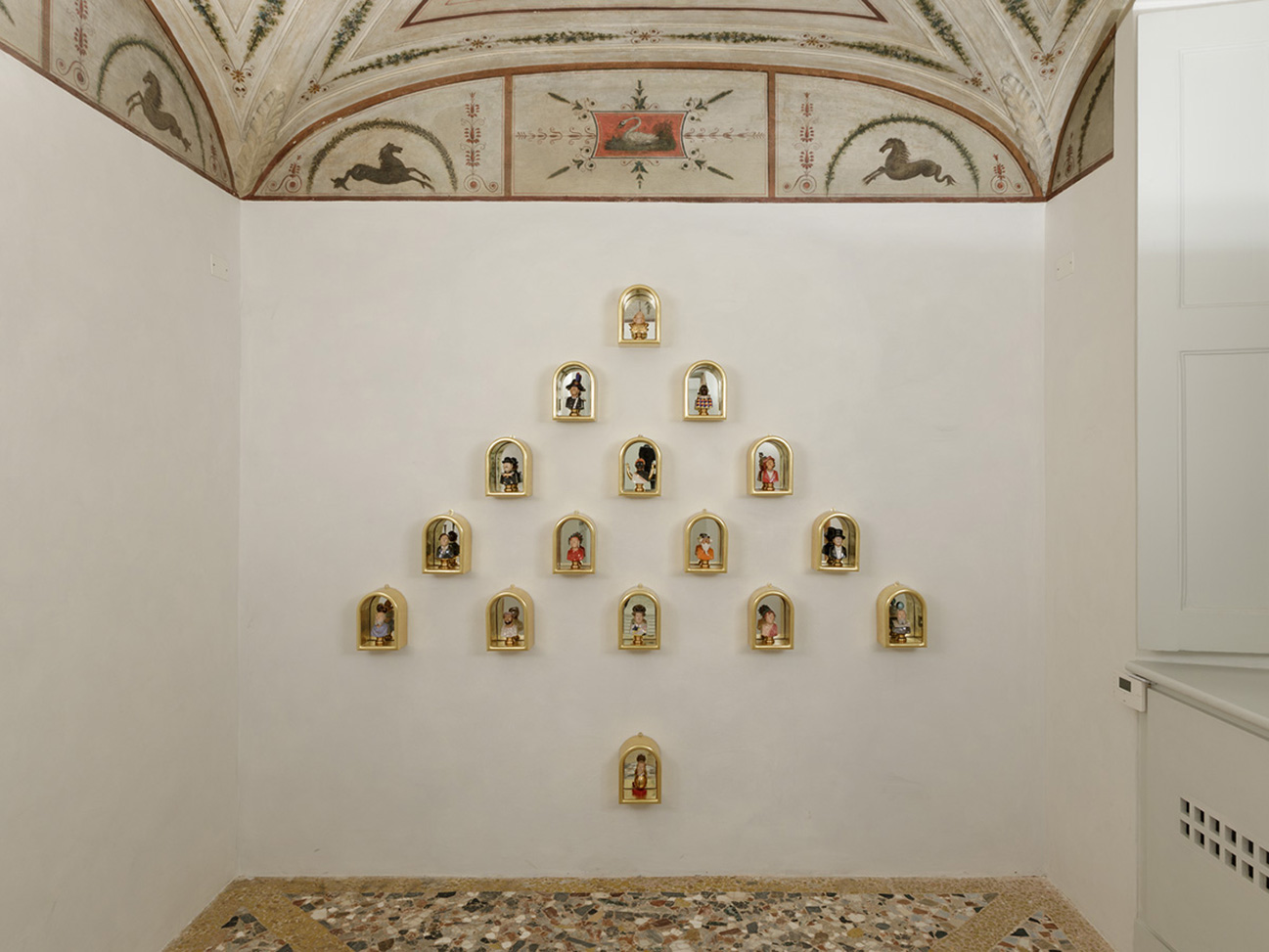 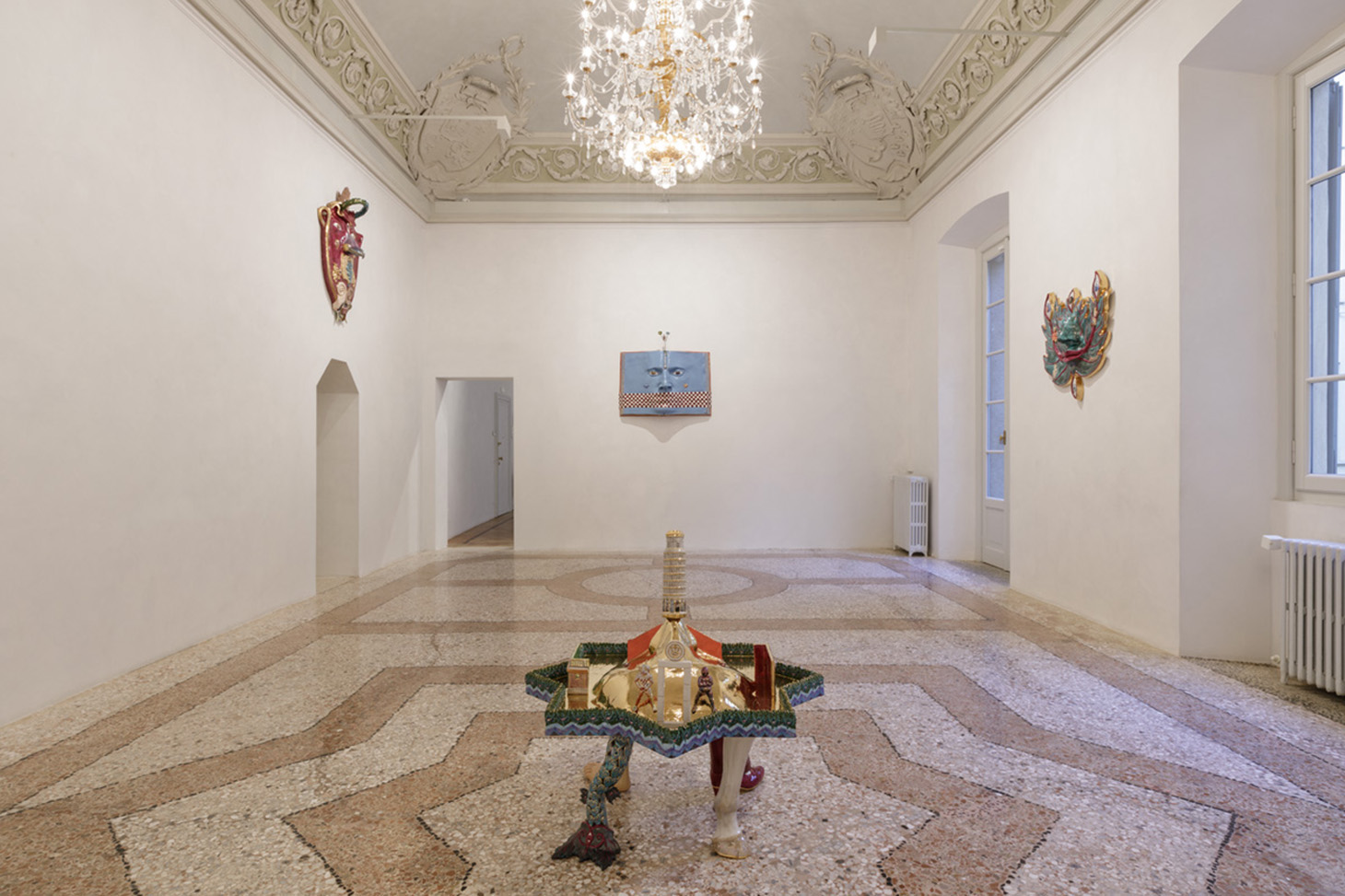 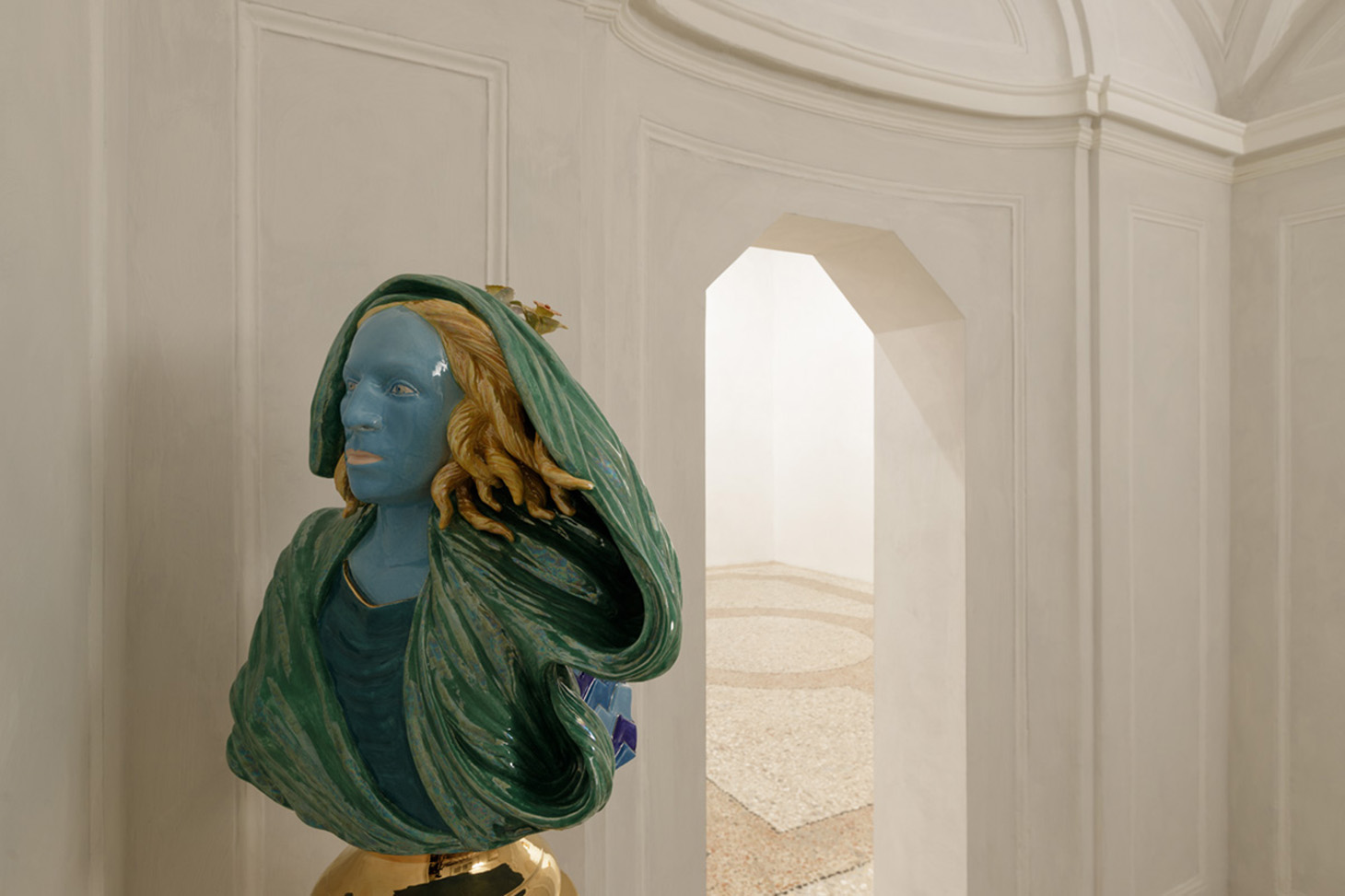 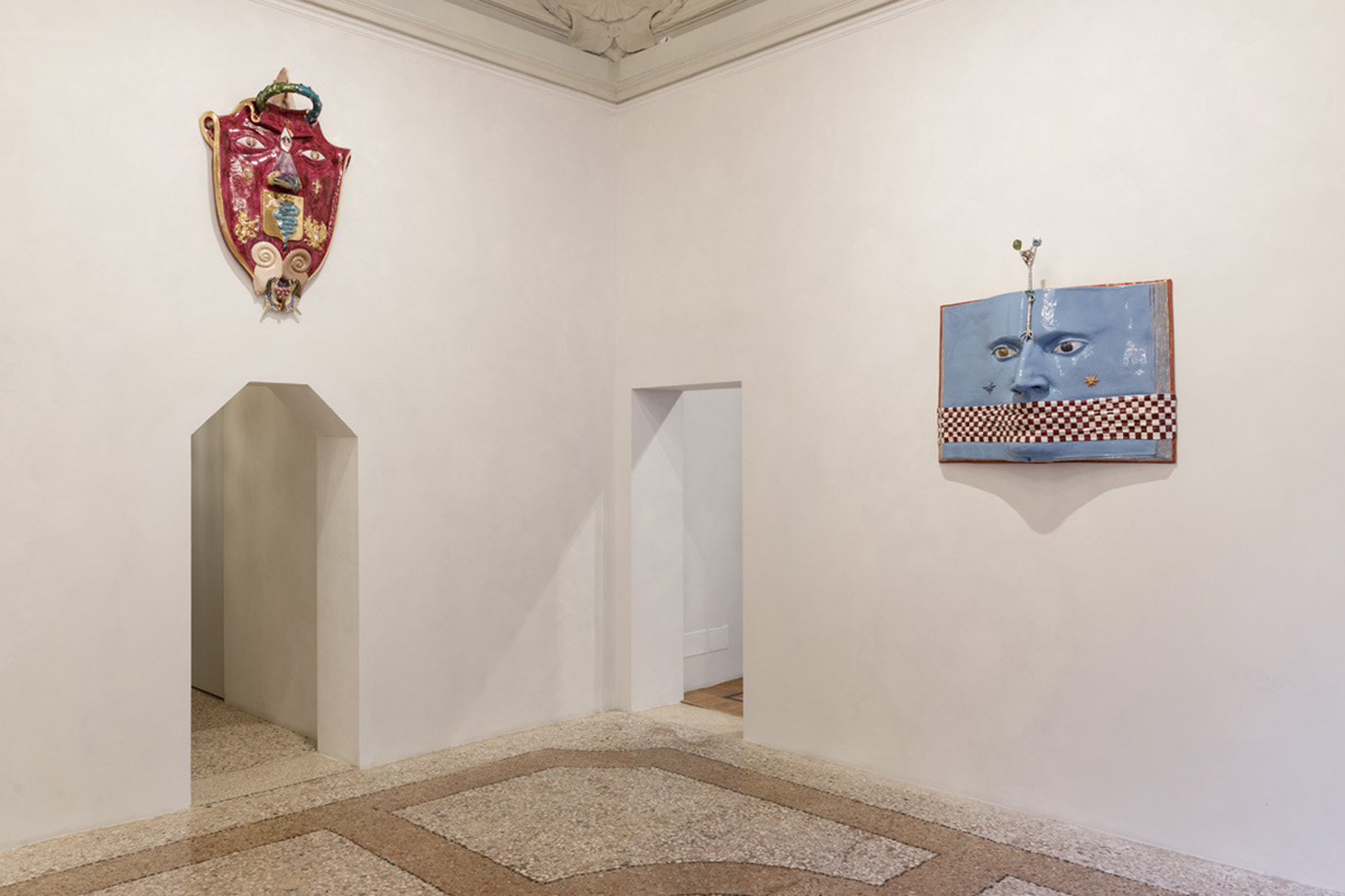 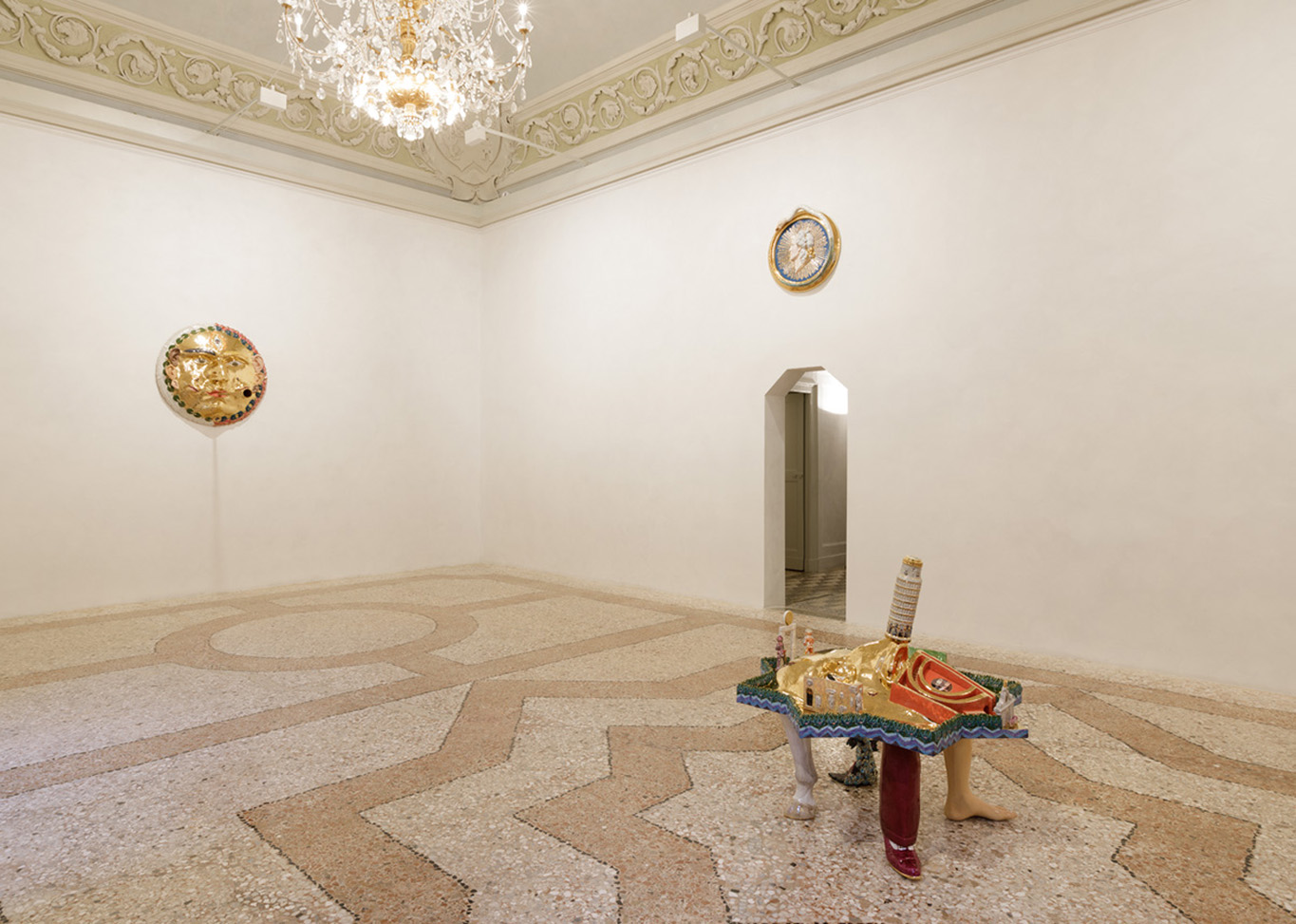 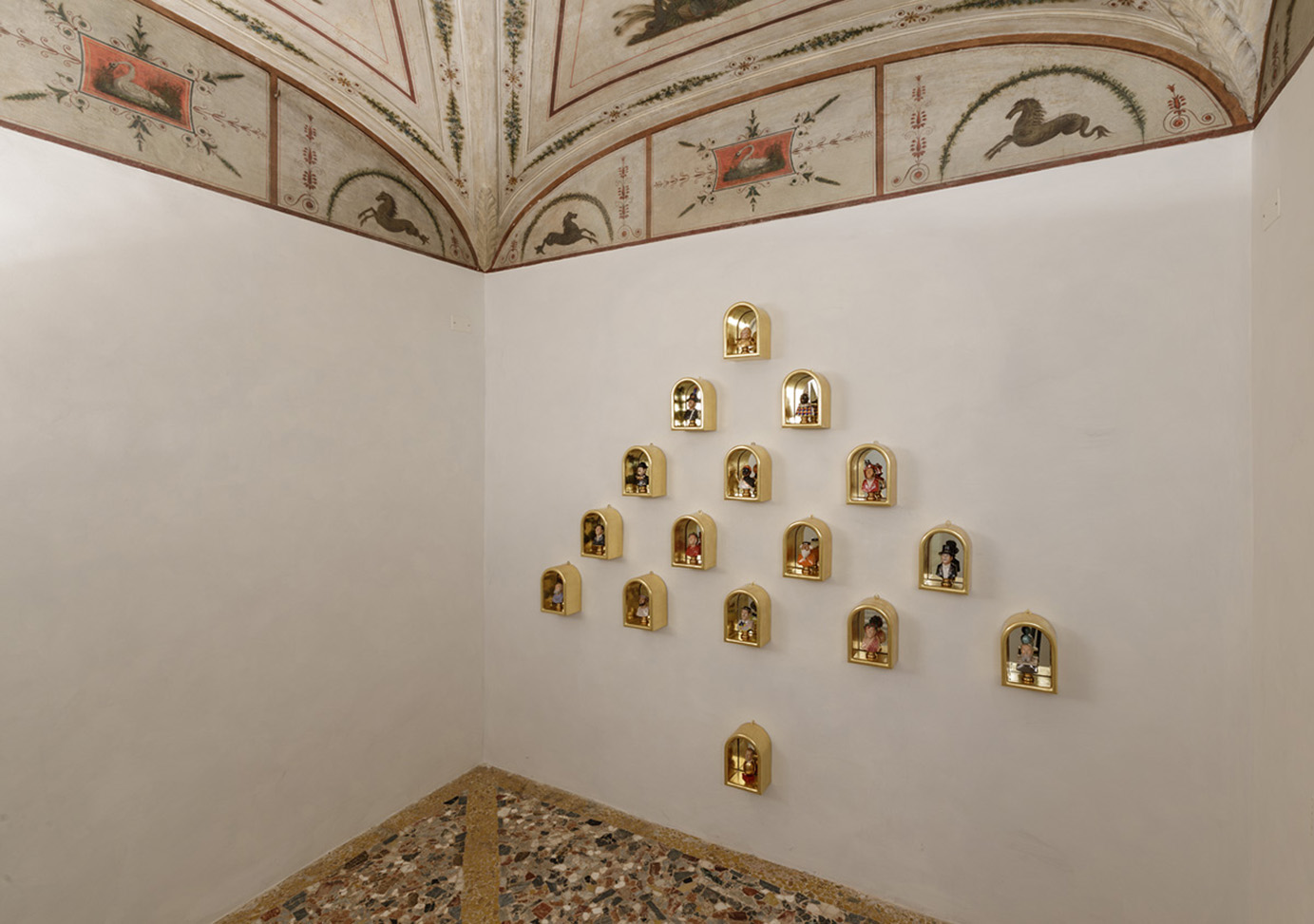 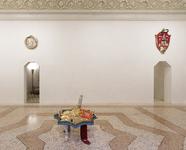 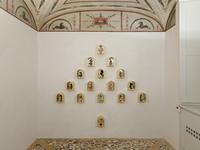 Luigi Ontani has described his practice as "the adventure I live as a person of art”, where art and life are inseparable, becoming a journey of pursuing and exploring one’s identity against historical canons. In his extensive career the eclectic artist has traversed different media, using objects, hand-colored photographs,  papier mâché, ceramic sculptures, slide projections and performances to explore fictional re-creations of  identity and regression into childhood and memory. Each body of work the artist has created is united  through the usage of himself, as the centre point to explore a multitude of personae, embodying himself as his favourite heroes from mythology, fairy tales, history, and art history.

For Albericus Belgioiosiae Auroborus, Ontani has created a narrative that embodies the history and the architecture of Palazzo Belgioioso, the prestigious palace housing the gallery, completed in 1787 by architect Francesco Piermarini, and that was renowned for being the beating heart of the life of the wealthy and  cultured Milanese of the time. The interaction between the space and the artist is strongly enthused by the characters and the events that have shaped the rich history of the building and that become tangible in the  form of eight large ceramic masks, created by Ontani specifically for the occasion. Through each work the artist creates a narrative that continues and strengthens his exploration of individual identity, here through  symbolism and heraldry.

Each mask on display creates a dialogue between historical symbols and mystical Oriental suggestions, key elements of the poetics of Ontani’s practice. Adorned with anthropomorphic details, like eyes and nose, this mannerist type of work confers to each emblem in the exhibition its own stylistic and symbolic importance,  powerfully infused with mythological and oneiric details.

PalmAltrove, the golden star shaped sculpture at the centre of the second exhibition room, summarizes the union between Indian symbolism and the history of the West: the allegorical mouth, whose shape is inspired by the cosmic gardens of the Maharaja Jai Singh observatories in Delhi and Jaipur, gives life to a miniature of the leaning Tower of Pisa through the alchemy of the breath; the Etra d'ESTEtica mask at the entrance is dedicated to the art of painting, adorned with a long tapered brush and small mythological figures that at first glance appear as splashes of colour on a golden palette.

Using the same stylistic cipher and sense of humor, the artist has revisited the ancient emblem of the Belgioioso family, once symbol of the historical prestige of the family and present in the family's herald visible in the centre of the gallery ceiling and in the ouroboros dedicated to Alberico di Belgioioso, the nobleman and Milanese aesthete who commissioned the construction of the building in the 18th century.

With chronology and literature as the main driving forces behind the exhibition, a key reference point for Ontani is avant-garde writer Giorgio Manganelli’s book Discorso dell’ombra e dello stemma. As Manganelli observes, “to be crazy is the mother of art and literature”: Luigi Ontani restores the purity and innocence of his iconographic research in a kaleidoscope of images and complex references, roots of conceptual thought. Albericus Belgioiosae Auroborus is a sculptural exploration of identity that combines heraldic iconography with the hypertrophic imagination of the artist.