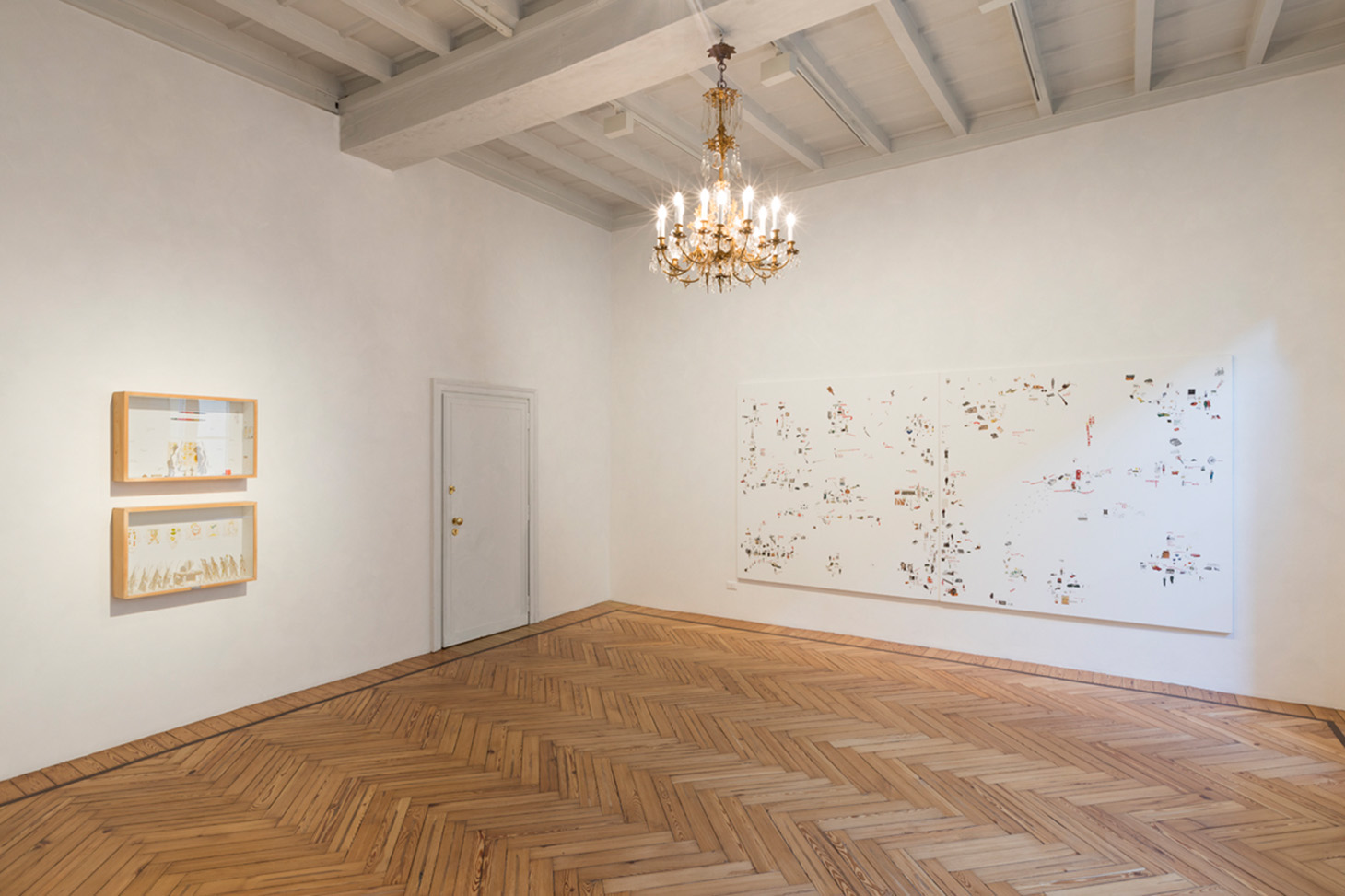 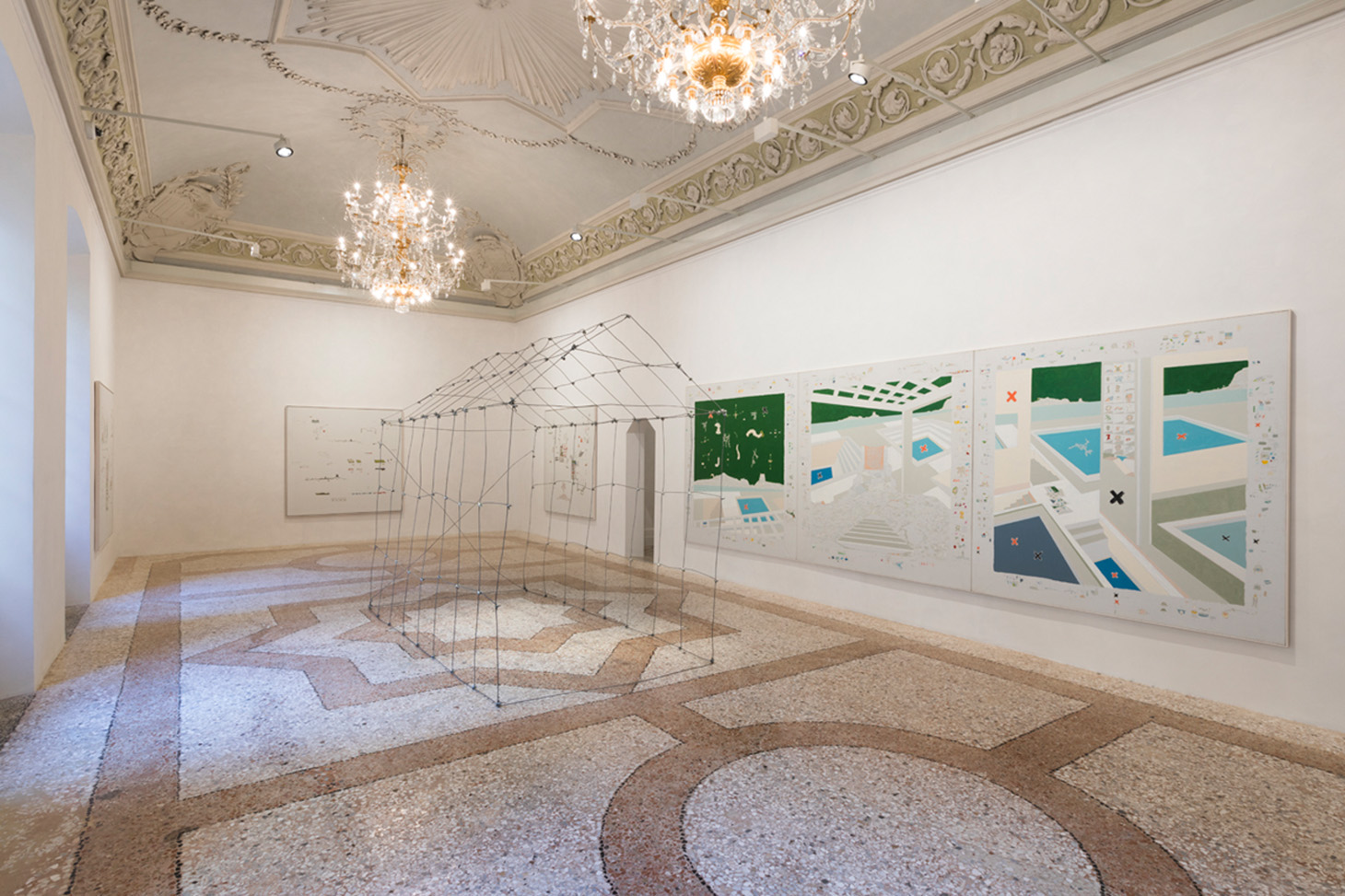 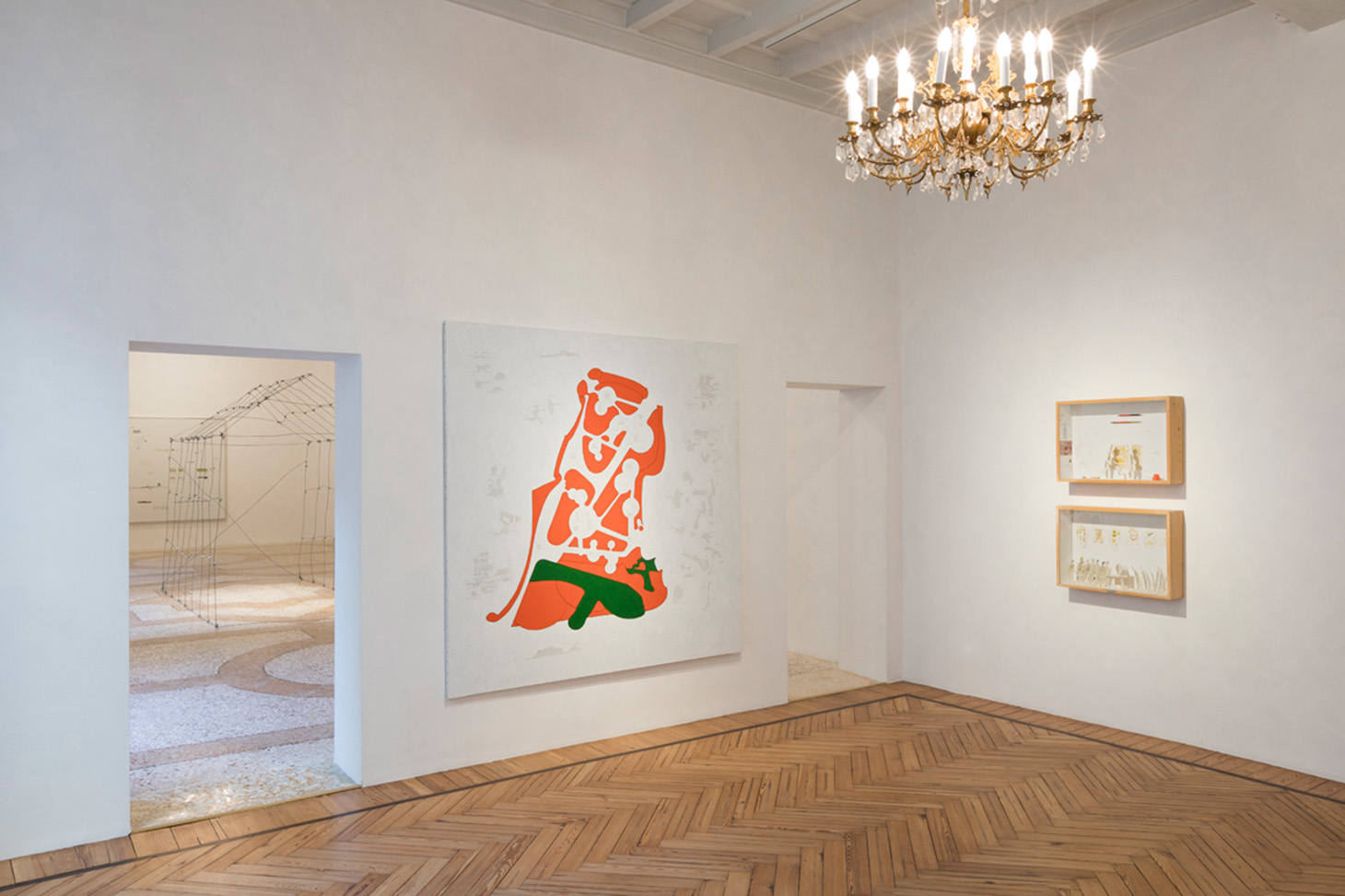 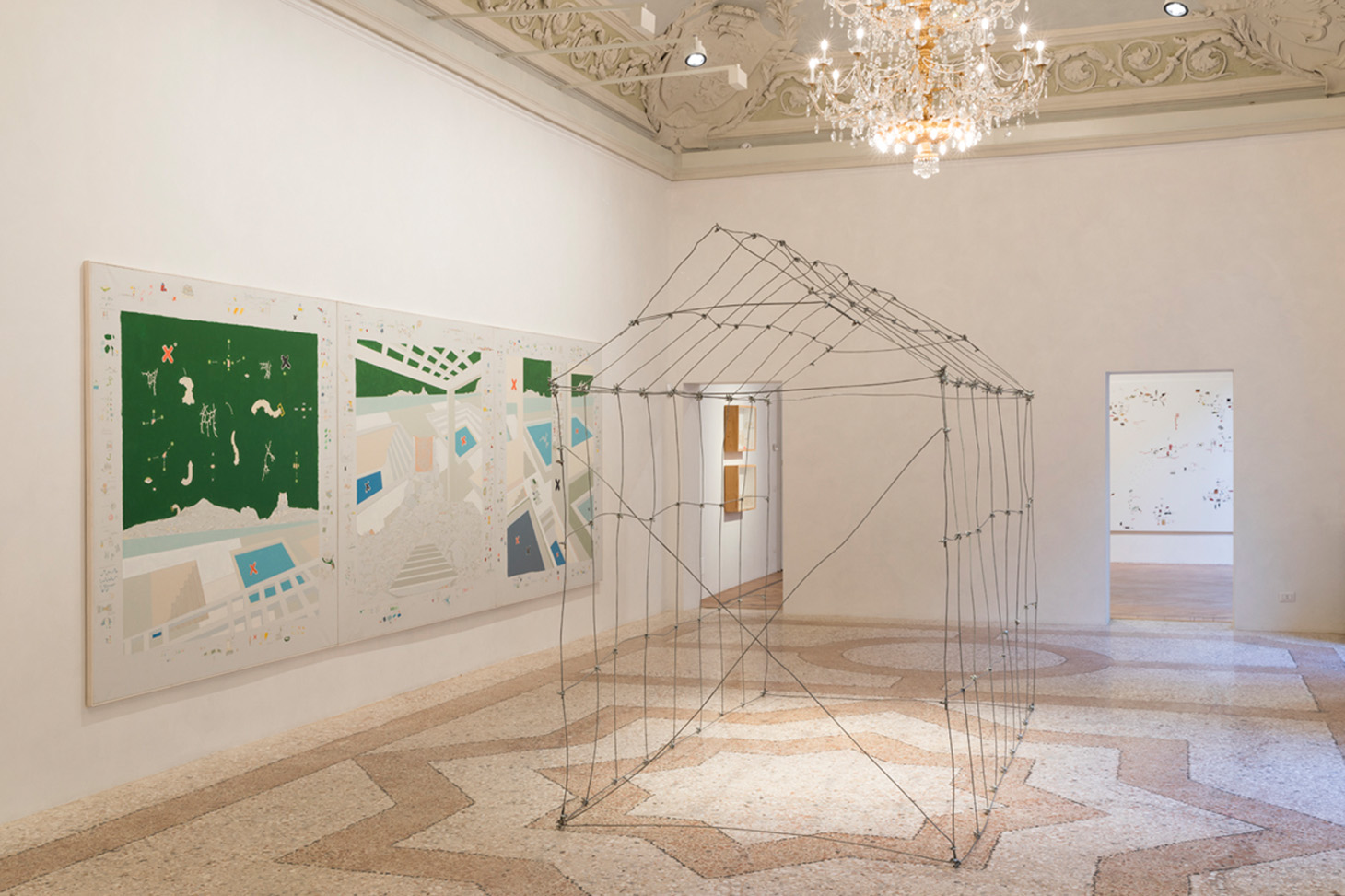 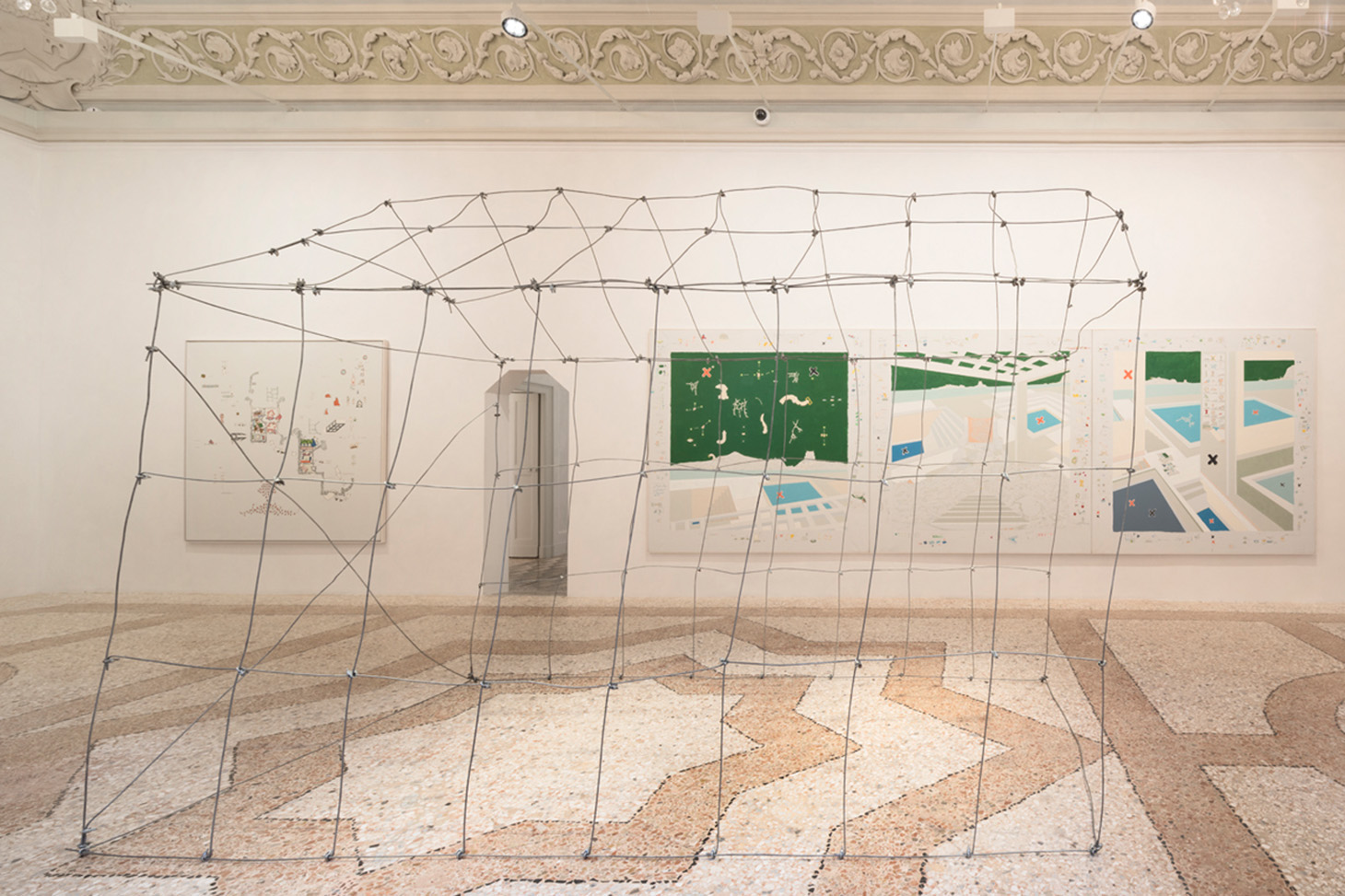 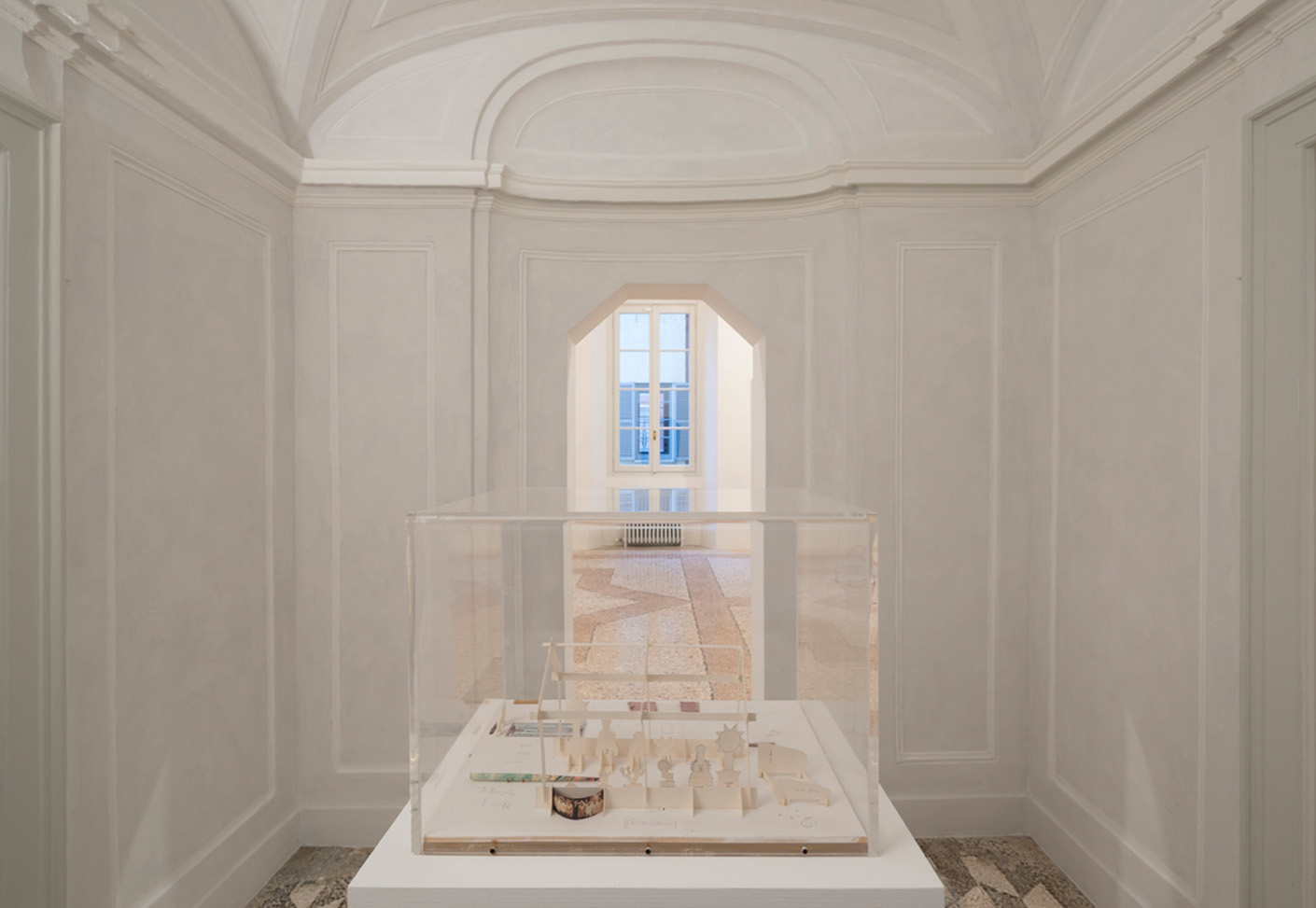 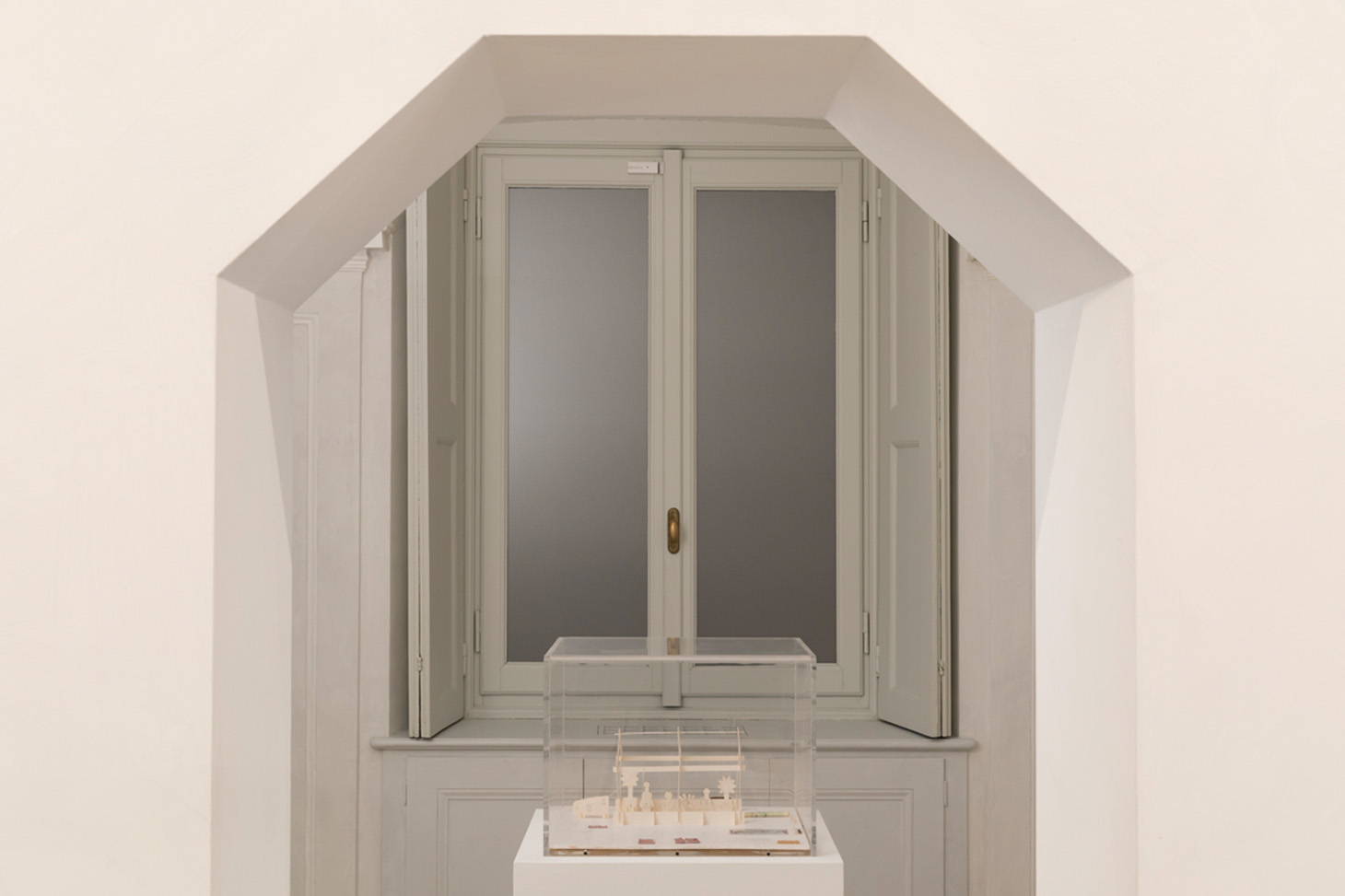 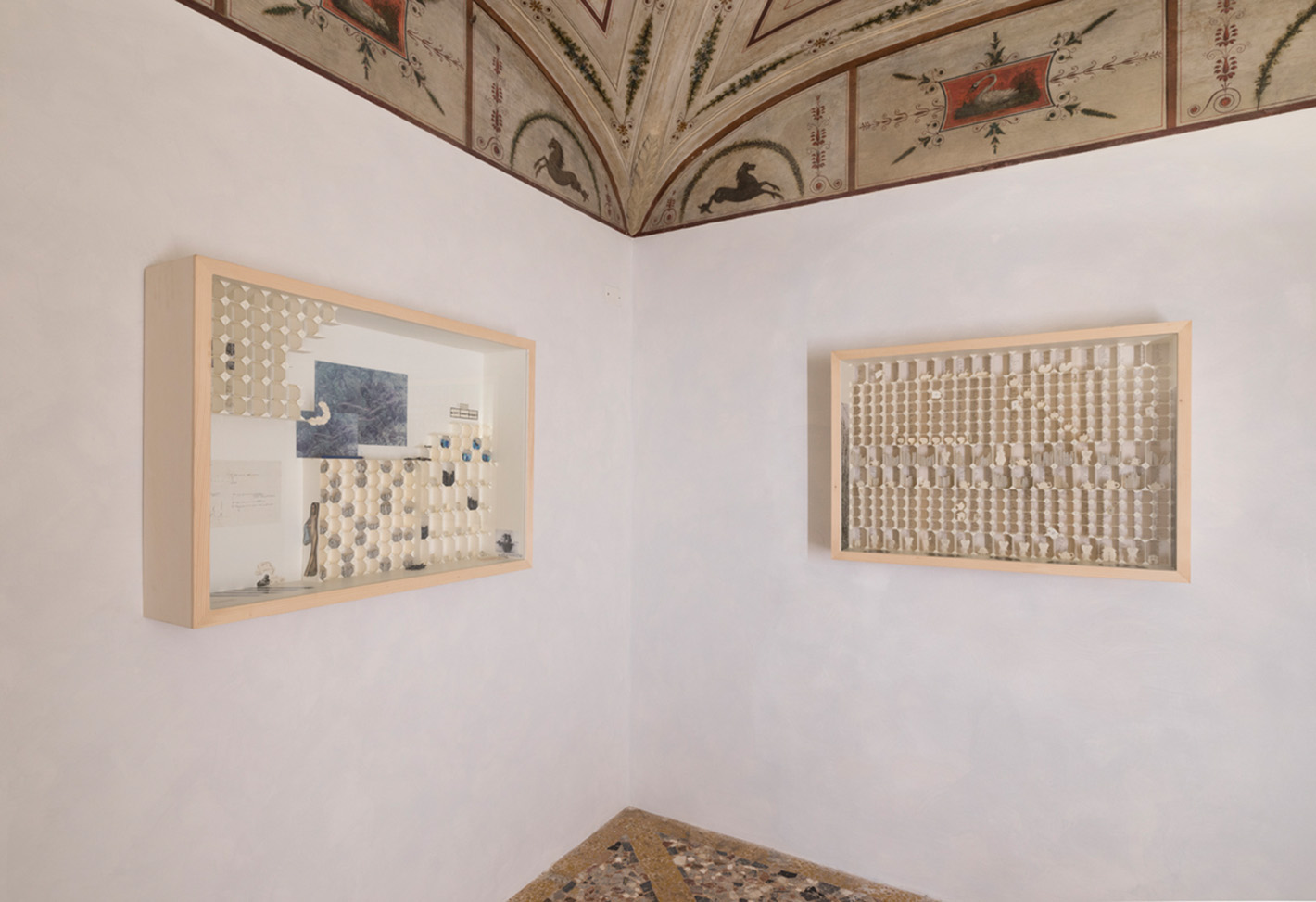 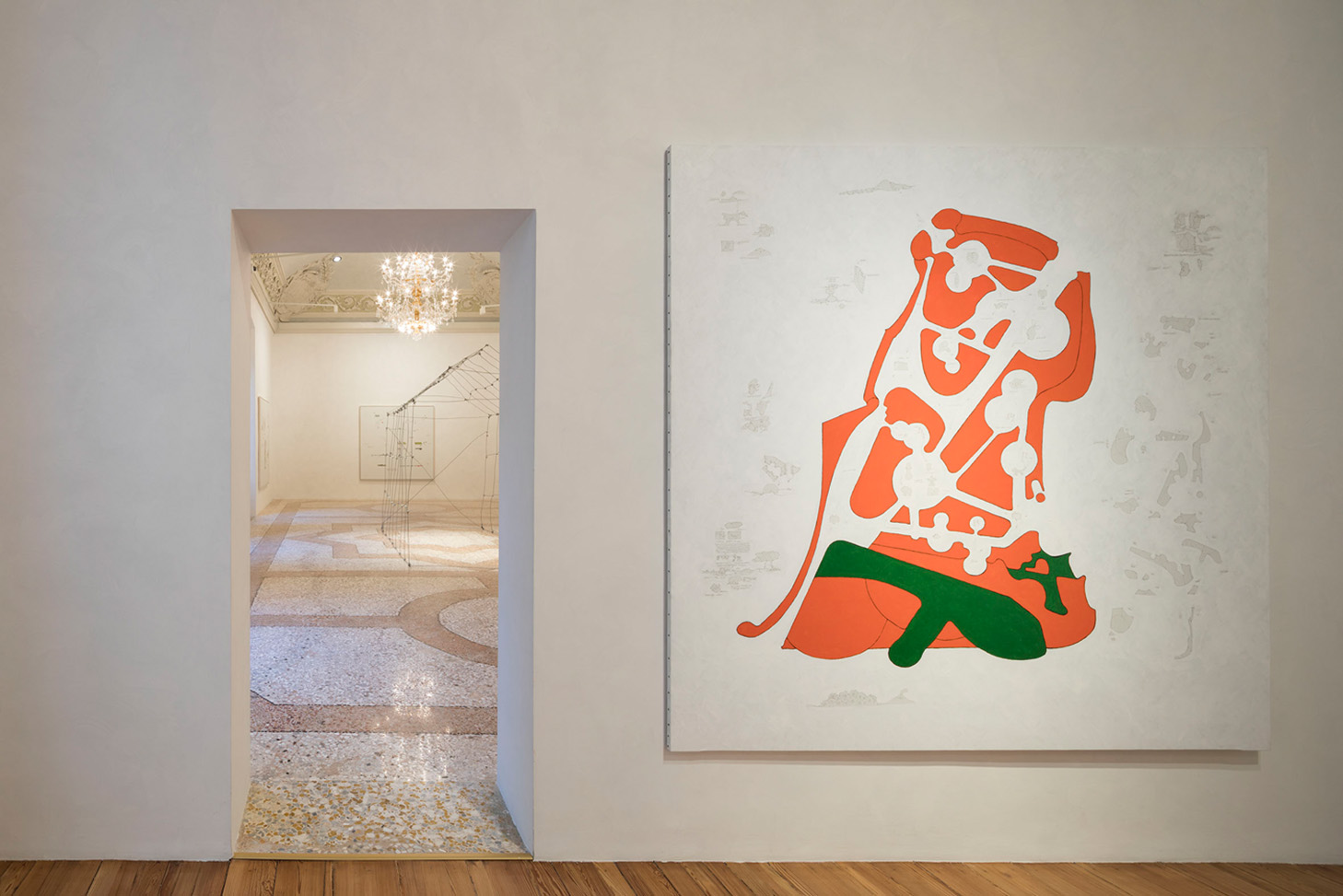 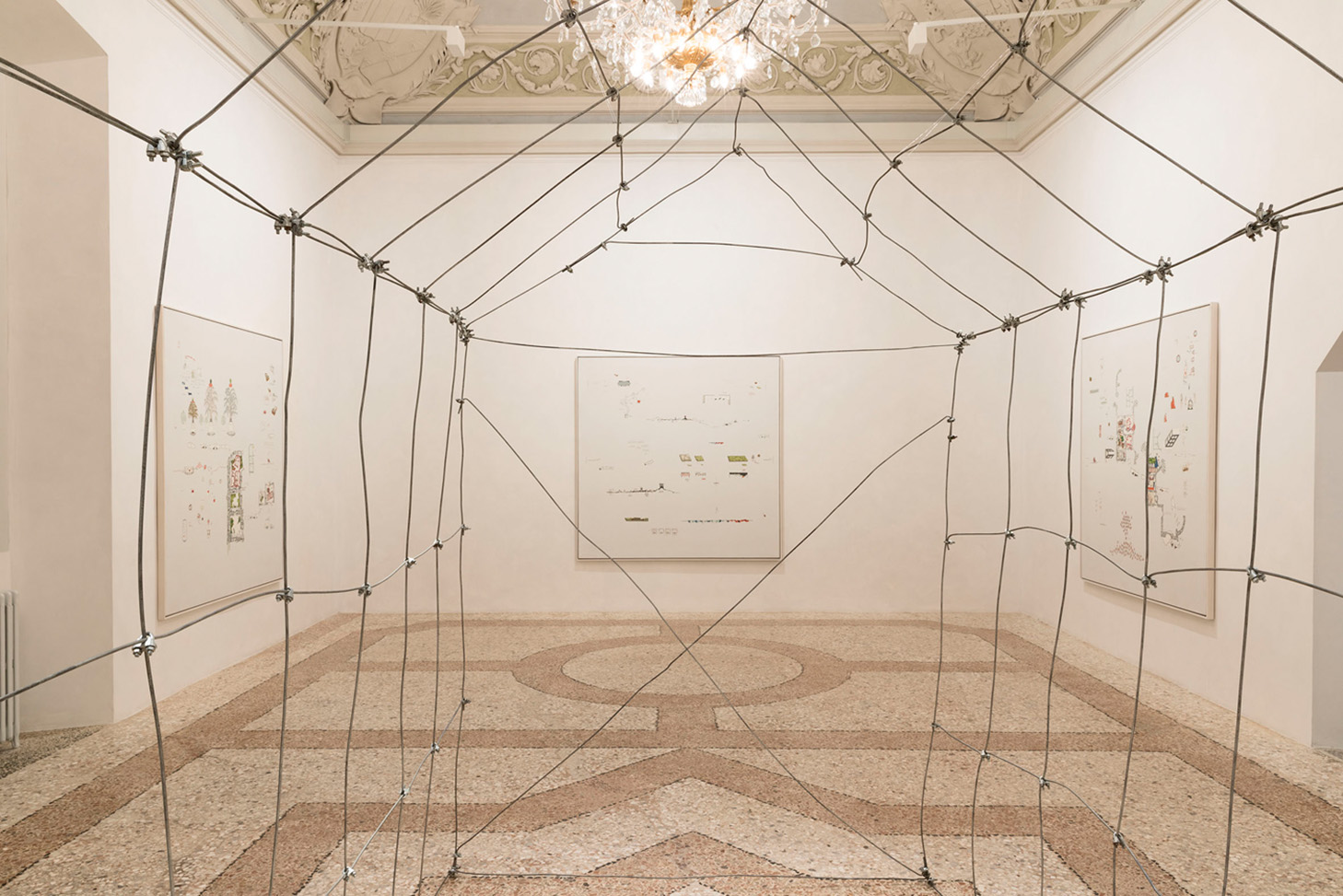 Massimo De Carlo is pleased to present the first exhibition by Gianfranco Baruchello in its Milan gallery in Palazzo Belgioioso. Greenhouse brings together an extraordinary selection of works that span from the 1960’s to 2016. Through his long and on going, unique, career Gianfranco Baruchello has explored and materialized through art his interest in the relationship between the mechanisms of the mind and their relationship with urbanism, design, anatomy, agriculture and nature.

Greenhouse exemplifies Gianfranco Baruchello’s understanding of space – psychological and physical – as a language, an architectural iconography that encompasses and embodies values, gestures, metamorphoses, empathy and truth. This language becomes tangible through a series of exceptional signature large canvases - populated by minuscule figures and drawings, the iconic 1970’s box compositions, sculptures, and installations.

Greenhouse embodies Gianfranco Baruchello’s experience of a kaleidoscopic absorption of a variety of images and information, from the early 1960’s to the 1990s. Each work becomes a graphic reflection on the relationship between man, space and the ever-changing urban landscape. For Gianfranco Baruchello nature is an open space that the artist recodifies through miniaturizing, reducing, sculpting and enclosing it. Baruchello’s key topic of the anti-monumental is reshaped through the daily gestures, laying out and maintaining a garden, which mimics and mirrors the one of our mind. Greenhouse traces a life long reflection on space, shapes and land that tackles the grey area, crude yet oneiric, between the self and the other.

The works exhibited collect and summarize Gianfranco Baruchello’s ability to transform into art his relationship with the space around him, outlining both the political and social narrative together with the poetic and philosophical one. The iconic diptych More news in a moment but first this message (1968), created with cut-outs of newspapers and pencil drawings on canvas, illustrates the relationship between the artist and his attempt to decode the complexity of the stratification of information and media languages of the time – encompassing the Vietnam war, student revolts and television. The box compositions of the 1970s, inhabited by Duchampian uniforms and political narratives, are representations of Gianfranco Baruchello’s interpretation of the rise of the feminist movement in Italy: Baruchello hopes that the rise of feminism will be able to bring a sort of peace treaty between genders, anticipating an attitude that will only emerge a few decades later. In the last room of the exhibition two other objects of the late Seventies collect in a fragmentary and anti-historical way a personal archive of the artist's obsessions.

The three paintings titled Nella stalla della Sfinge (1980-1981) represent the final part of Baruchello’s investigation around the theme of sweetness - the project consisted of a book and a series of filmed interviews with philosophers and critics such as Jean-François Lyotard and Félix Guattari. The canvases are scattered with miniature characters, which populate Baruchello’s inner world and his artistic practice: the most recurrent themes are those of the realm of the house, in which interiors, rooms and meat carpets describe physical and emotional states. The work Acrobata Clandestino, exhibited at the Venice Biennale in 1988, is an excellent example of the representation of the complex relationship between the philosopher and the artist, in which, according to Gianfranco Baruchello, the artist is like an acrobat who performs the difficult parts of the philosophical activity, those that philosophers avoid doing.

The installation titled Una casa in fil di ferro (1975) and the sculpture Greenhouse (1977) embody the experience of Agricola Cornelia, a farm on the Roman hills where the artist lived and worked from 1973 to 1998 (where the Baruchello Foundation is now located) and they allude to the artists’ research of a space of his own, both physical and mental: ephemeral and open constructions and houses to live in and spaces to grow in, these greenhouses were made at a time in which Baruchello had extended his artistic to encompass the farming of vegetables.