DOWNLOAD THE APP TO EXPERIENCE VSPACE WITH OCULUS QUEST

When I look at art, I follow my gaze. What is the first thing I see?  Where do I go from there and why? Noticing the play of my own attention has become my principle preoccupation when painting and looking at art. Artists deliberately orchestrate attention through particular decisions they make, and these decisions reflect motivations interior to what is simply depicted. Ulteriors, while similar to interiors, is an attempt to explore the way this play of attention constructs meaning. All the works in Ulteriors are on a spectrum from total abstraction to photographic representation.  Their connection with the interiority of viewers’ minds is through the ways they bodily engage their attention. Ambiguities arise in this process, whose motivations, while not exactly hidden, are not always readily apparent either. While I have met, known and even written about most of the artists here, the way their work engages my attention to create unsolvable mysteries is what unites their works.

On each wall two or three pieces initiate a conversation through their similar formal approaches to molding a viewer's attention. This conversation is then “overheard” and taken up on each adjacent wall.

For instance David Humphrey's Swimmers, depicts a deceptively simple, but conspicuously interracial, interaction. From the other side of a red brick wall, a shirtless tall White man, clad in loose fitting blue swim trunks revealing the top of his butt crack, is seen from behind self-embracing his torso. A laughing curvaceous Black woman in a white bikini faces him/us. The foreground is occupied by a bulbous grey form representing an abstracted car fragment, whose abstraction, while on a different order of representation from the figures, rhymes formally with their bodies and makes us aware of the graphic construction of the painting. Humphrey sexualizes this interaction but complicates it through the defensiveness of the guy's gesture and, particularly, the woman’s ambiguous expression of either flirtatious laughter…or derisive mockery. Amplifying both the abstractness of form and the understated red, white, and blue American theme in Swimmers, the adjacent Roe Ethridge photo, Nathalie with Hot Dog and Flag is more absurdly erotic. Nathalie is wearing a navy pea coat sitting on a personified, pale flesh-colored wiener squirting ketchup and mustard on its head in front of an American flag. But note the bruise marring one of Nathalie's alabaster naked legs. Chin resting on fist, wearing a crystal necklace, red hair flowing like the flag stripes, coat buttons echoing flag stars, Nathalie (years later, now Nathan) dangles their left hand provocatively between their parted legs. It isn't simply that Ethridge blurs the lines between art, fashion, and editorial photography but that he questions what constitutes the boundaries between those categories in the first place.

The formal structures that call attention to the abstract nature of representational images also unite the long wall. Matt Bollinger's Furlough II, my own 2013, and Jordan Kasey's Double Moon, all play with ideas about darkness, chiarascuro, and reflective surfaces and are moodily expressive without juicy brushwork. The cut V-shape of the red reflective vests in Furlough are echoed by the V-neck of the dress in 2013, and finally by the triangular piece of sky in Double Moon. And then there are the slivered horizontal reflections rising through the paintings that start as the edge of a car window on the left, move to the rim of a bowl in the middle, and end as an illuminated edge of pool tiles. The paintings on this wall have a brooding quality, and Double Moon, is simultaneously overwhelming and confidential, representational but formally abstract, whose thick moonlit figure has the monumentality of Picasso's Neo-classical period, and is as ponderous as a whale gliding through the ocean.

Echoing forms and movements from paintings on that adjacent wall, Anne Neukamp's painting Twirl is paired with Gary Stephan's more purely abstract, Bardo. Both present images as abstract forms and vice versa. By confusing functions of what is foreground and positive space with what is background and negative space, they emphasize the abstract nature of pictorial representation and the pictorial nature of abstraction. Their paintings pair a sophisticated formal starchiness with an idiosyncratic logic. As abstract painters, they might evade the seductive charms that conventional picture-making proffers, but its scent still lingers on their canvases.

And anchoring the whole show are the large tall paintings by Judith Linhares and Melissa Meyer which bracket the small painted and cut paper collage by Anthony Iacono. In Lizzie Hazeldean (after a strong-willed female character in an Edith Wharton novella), Meyer is even more purely abstract than Stephan with improvisatory brushstrokes that nevertheless create forms floating in a colorful, airy space. Its color and light is very similar in impact to Linhares more allegorical Carry On, depicting a tall orange naked man transporting (or being commandeered by) a small mauve naked woman on his back. While reflecting on Humphrey and Ethridge’s teasing sexuality, the formal complexity to Linhares’ strange vignettes is executed with energetic but measured brushstrokes which conjure ecstatic uneasiness pervading a slightly seedy Arcadia. In both Linhares and Meyer there is an awareness of how the whole painting is assembled in a way that is not planned, but is, nevertheless, spontaneously deliberate. As much as they use light to create a coherent image, they also fracture attention by the awareness of how abstractly everything is put together one stroke at a time. Anthony Iacono's little cut paper piece perfectly bridges the two. Mark presents the middle of an orange man in shaded underpants against a red background, straddling a black Windsor chair whose back and bars both imprison and striate the figure. A strange illumination at the base of the seat subtly illuminates and defines Mark’s penis. Iacono’s delight in color, form, and composition camouflage his darker fetishist fascinations, whose minor off-color behaviors are executed with a suave brio that belies their kinky preoccupations. 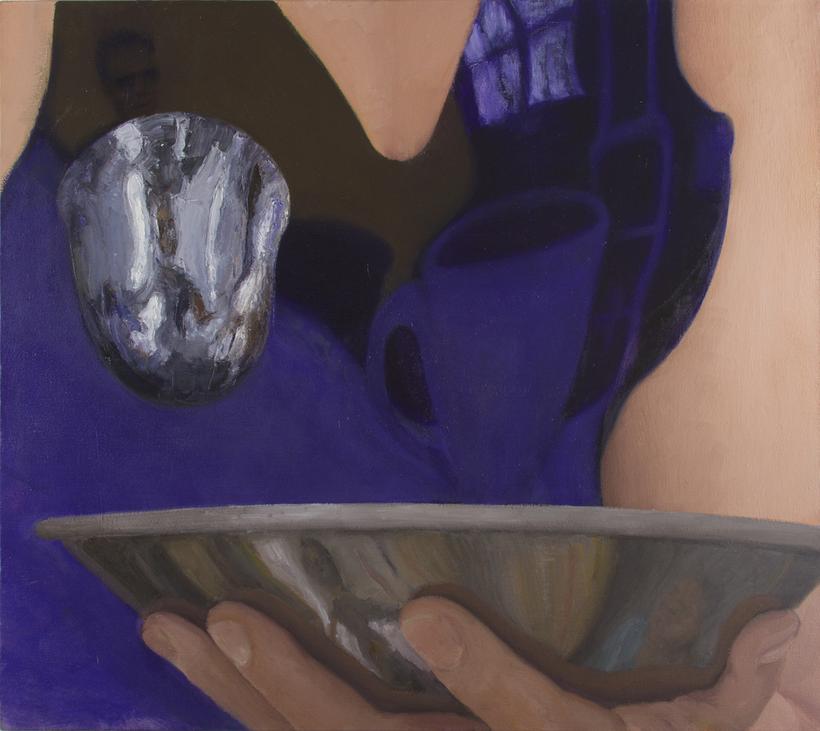 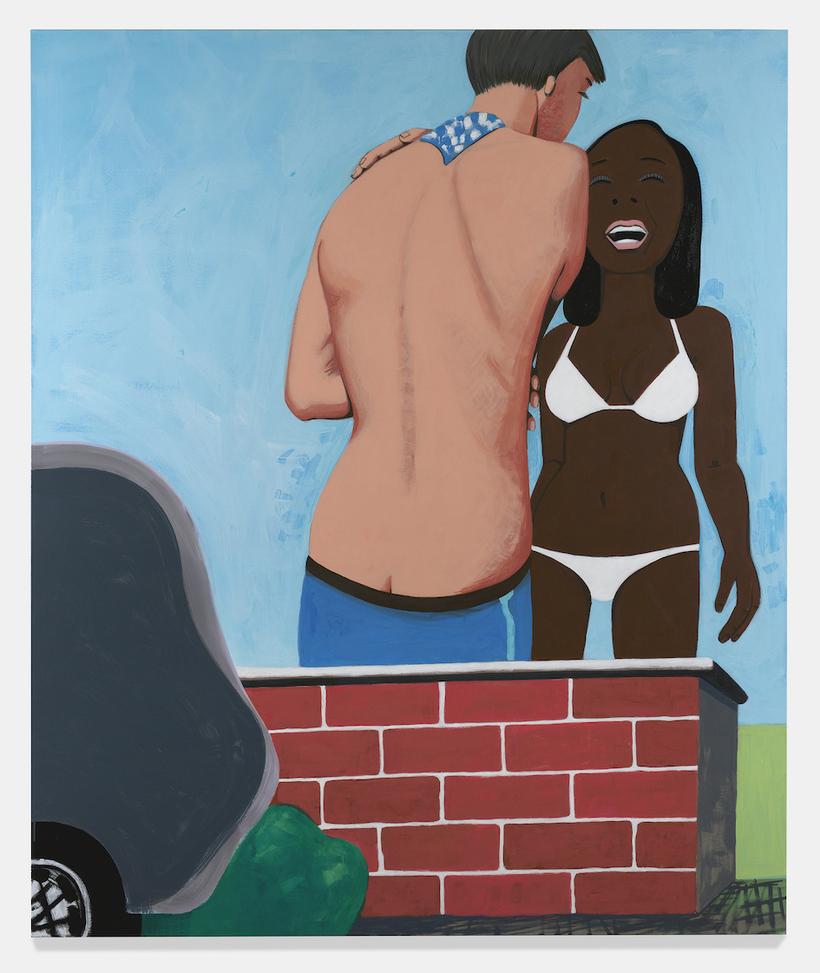 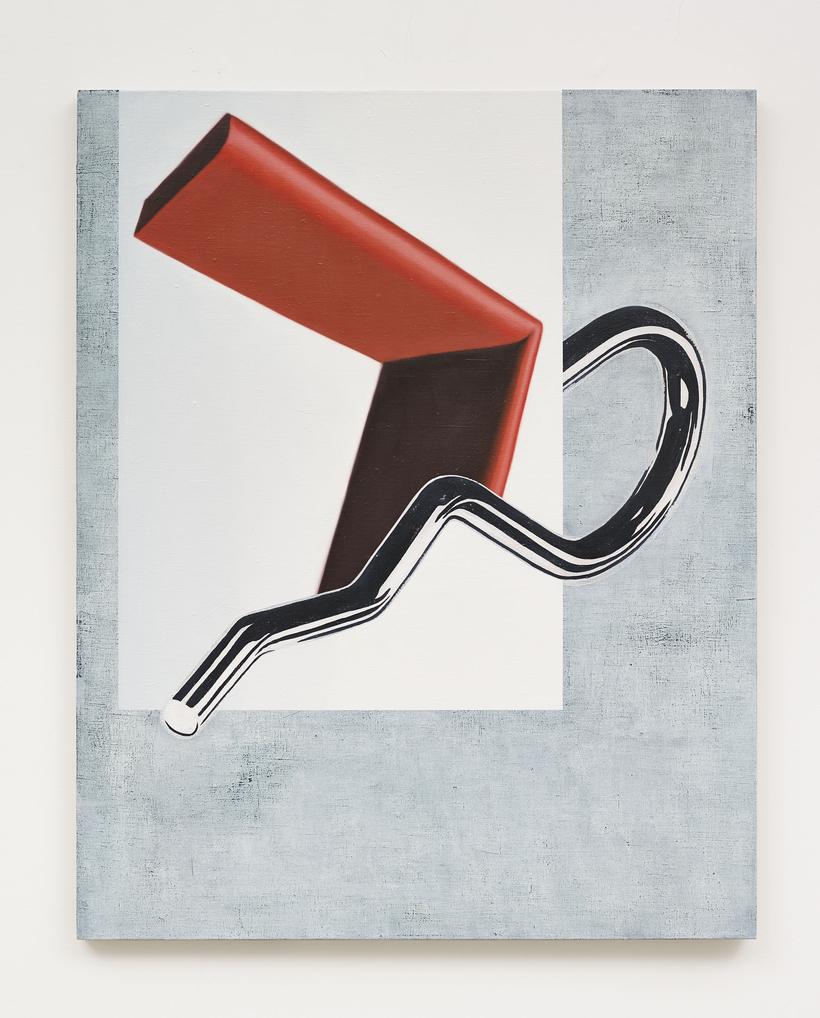 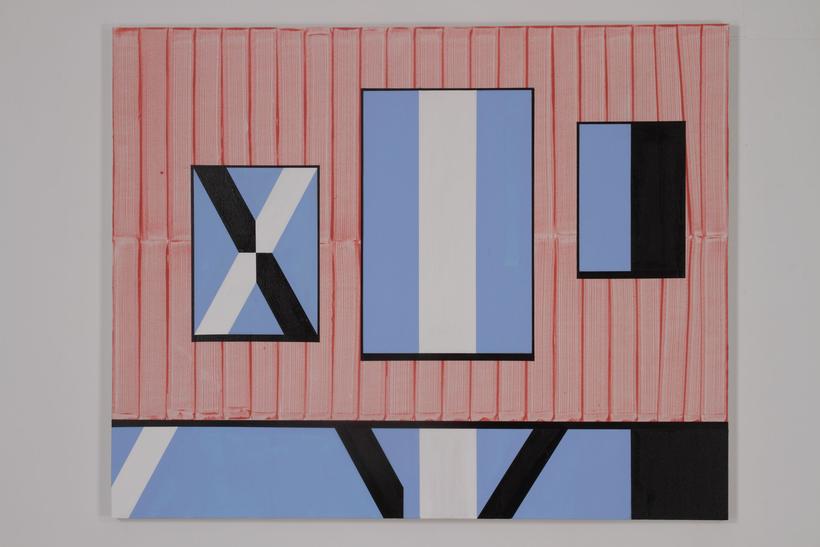 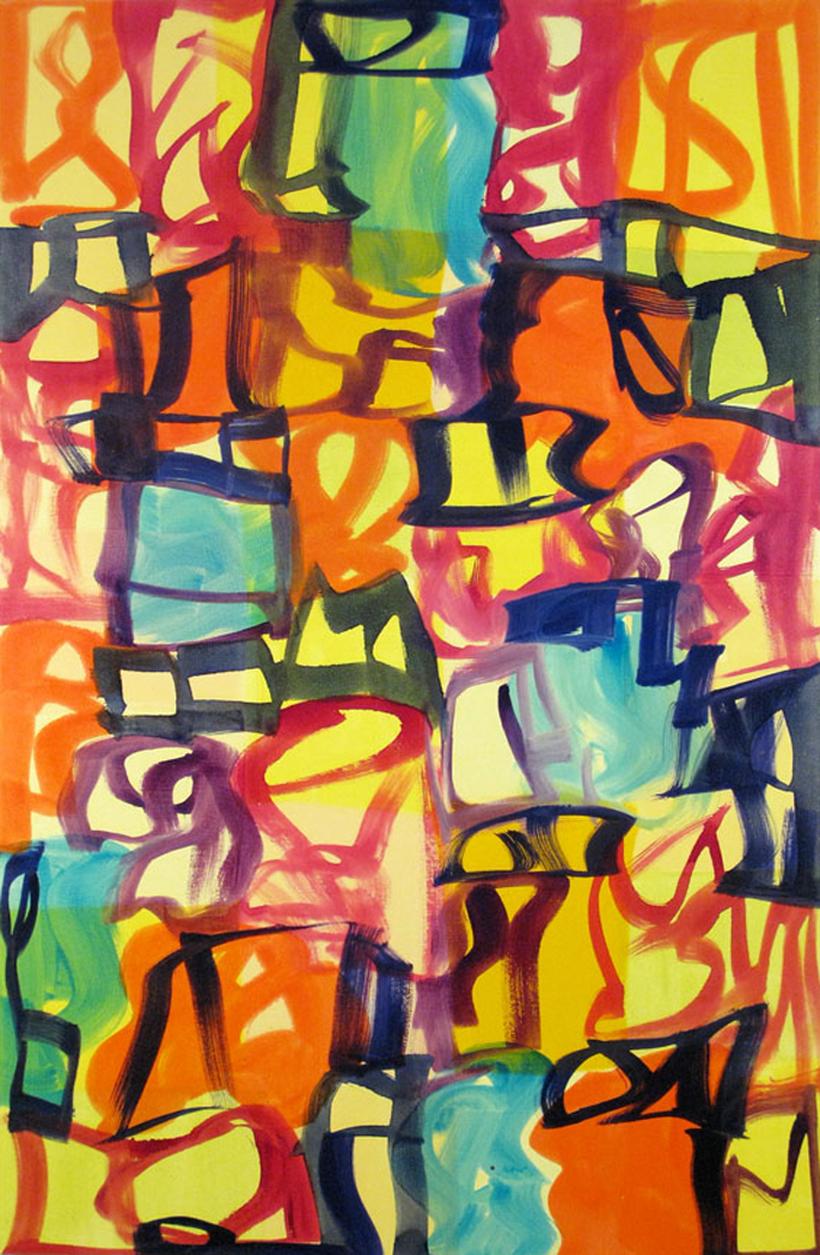 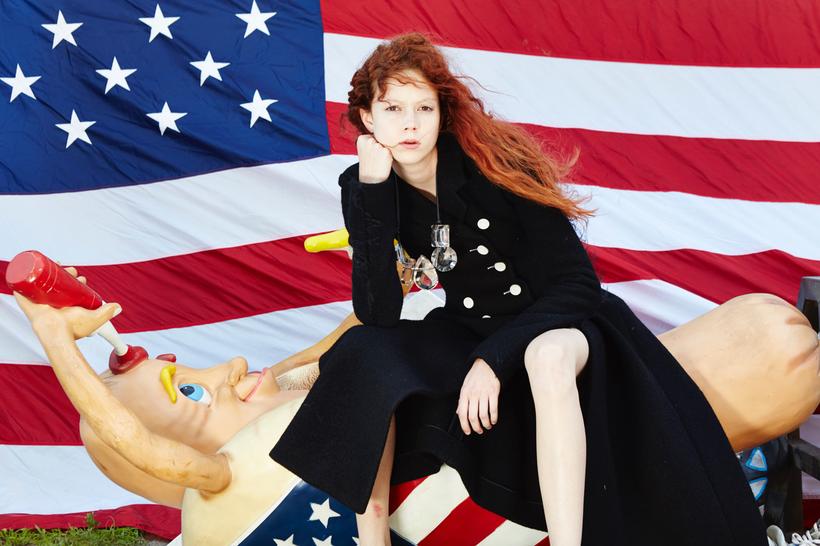 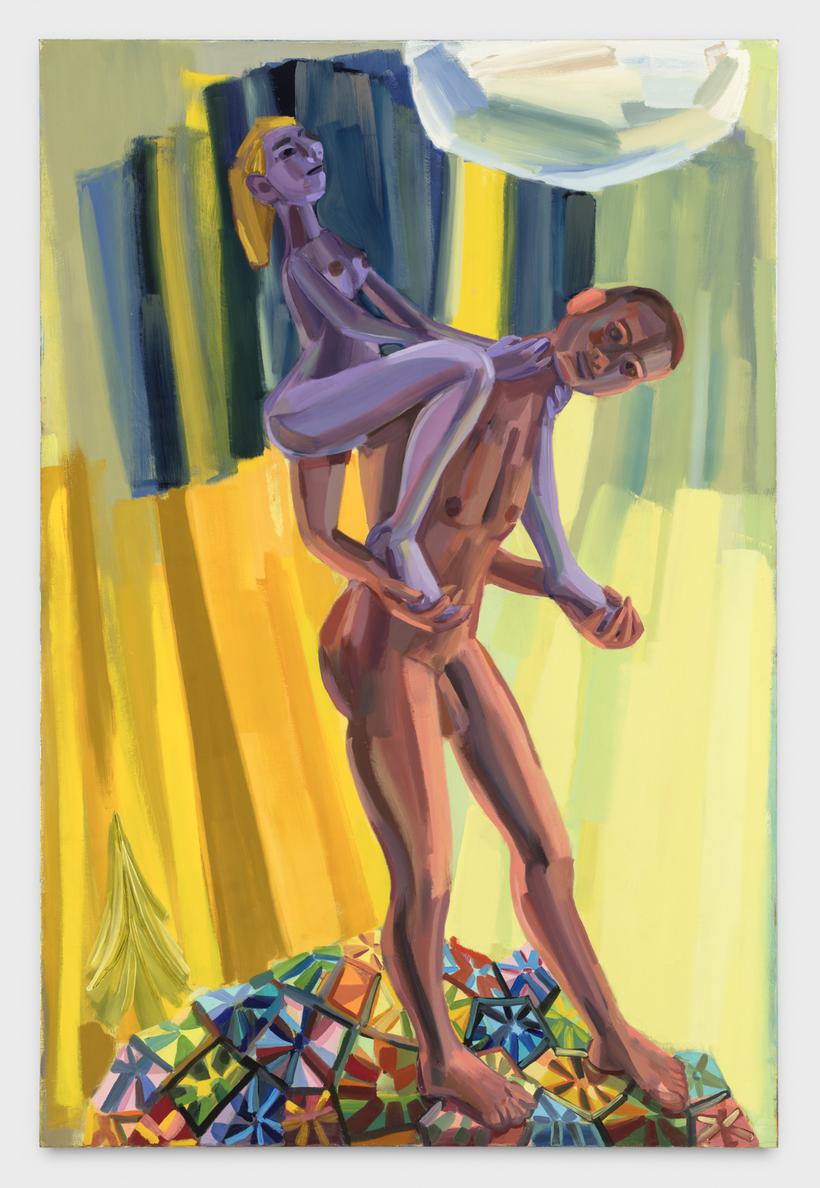 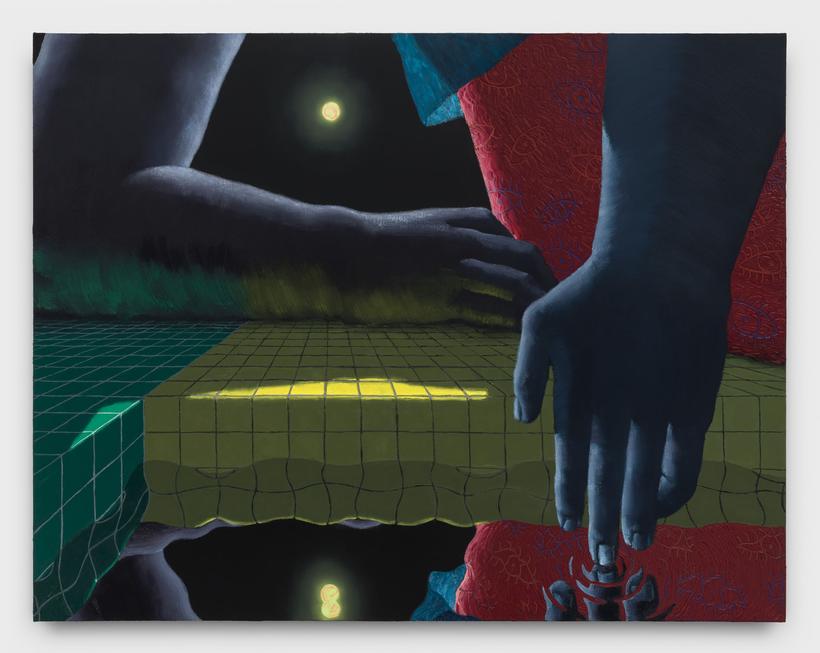 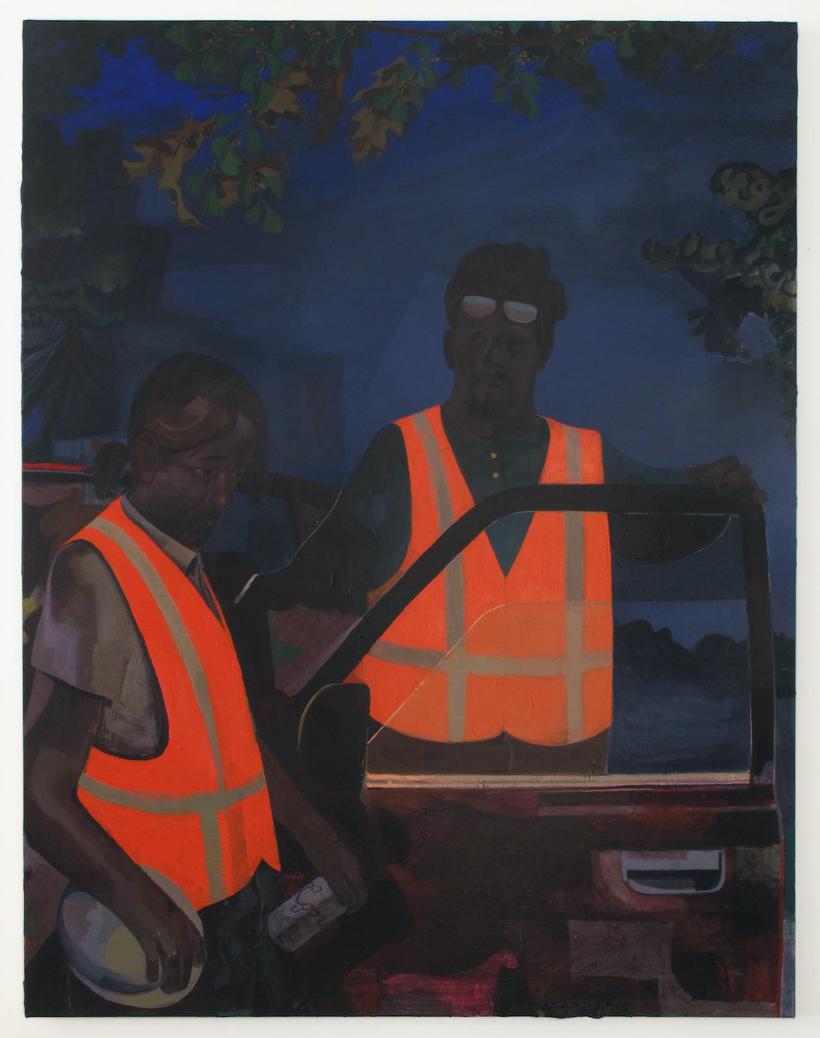 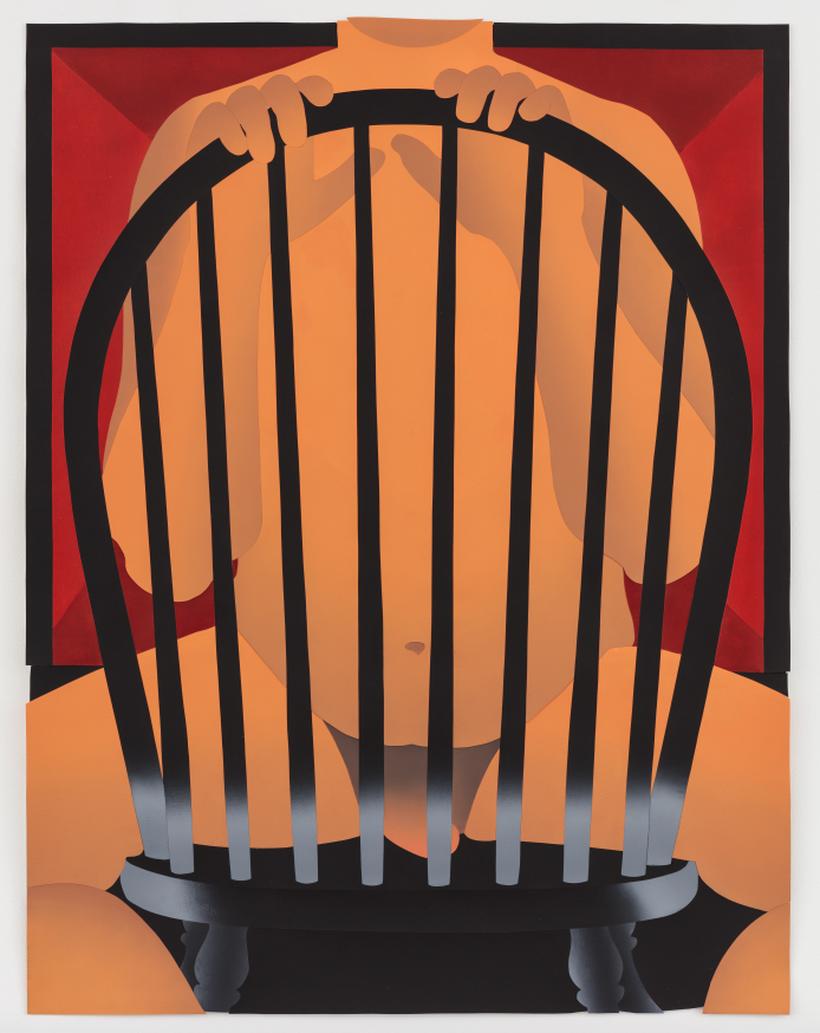 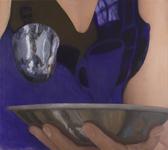 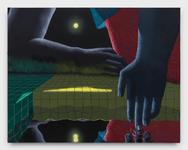