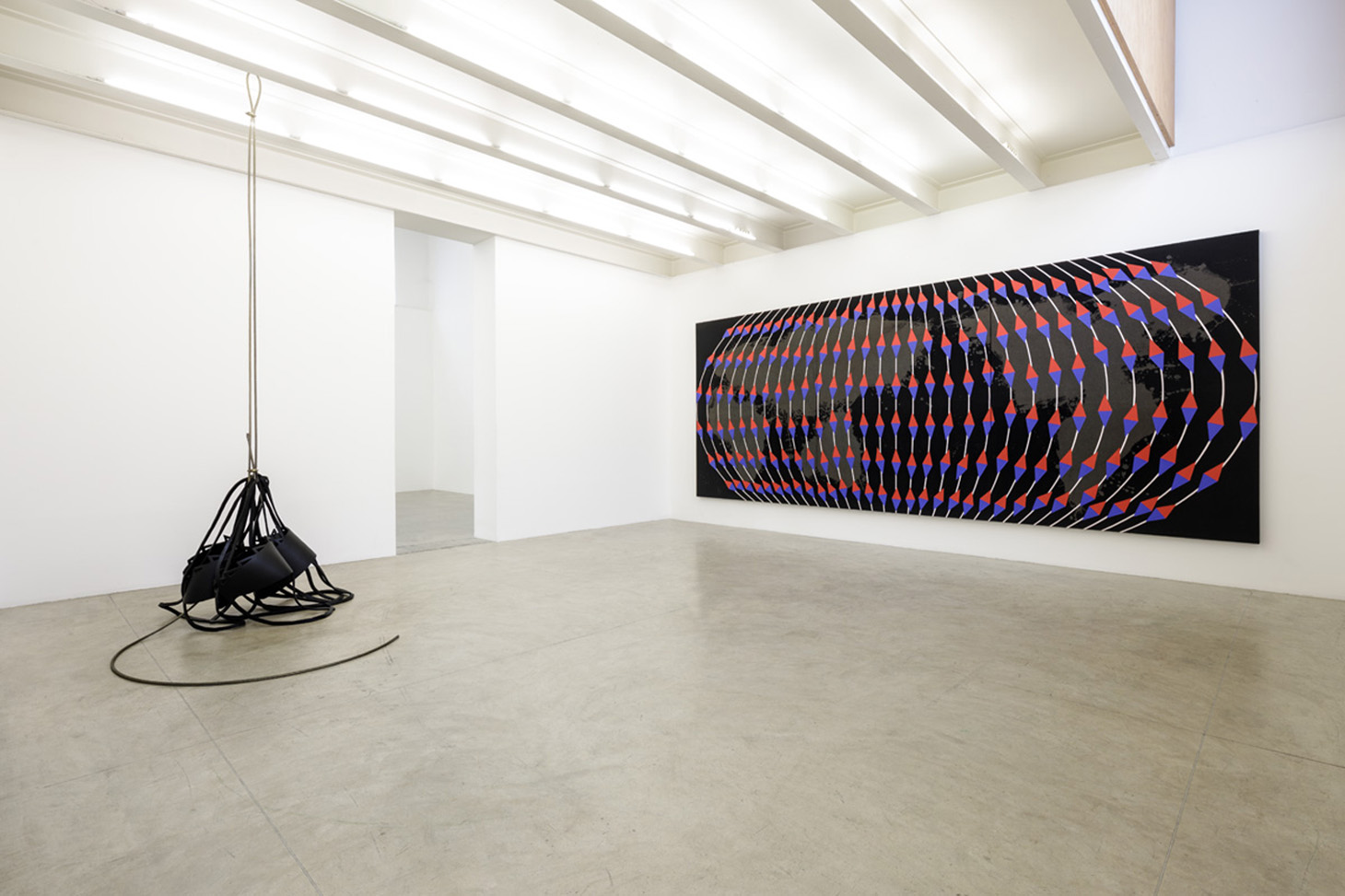 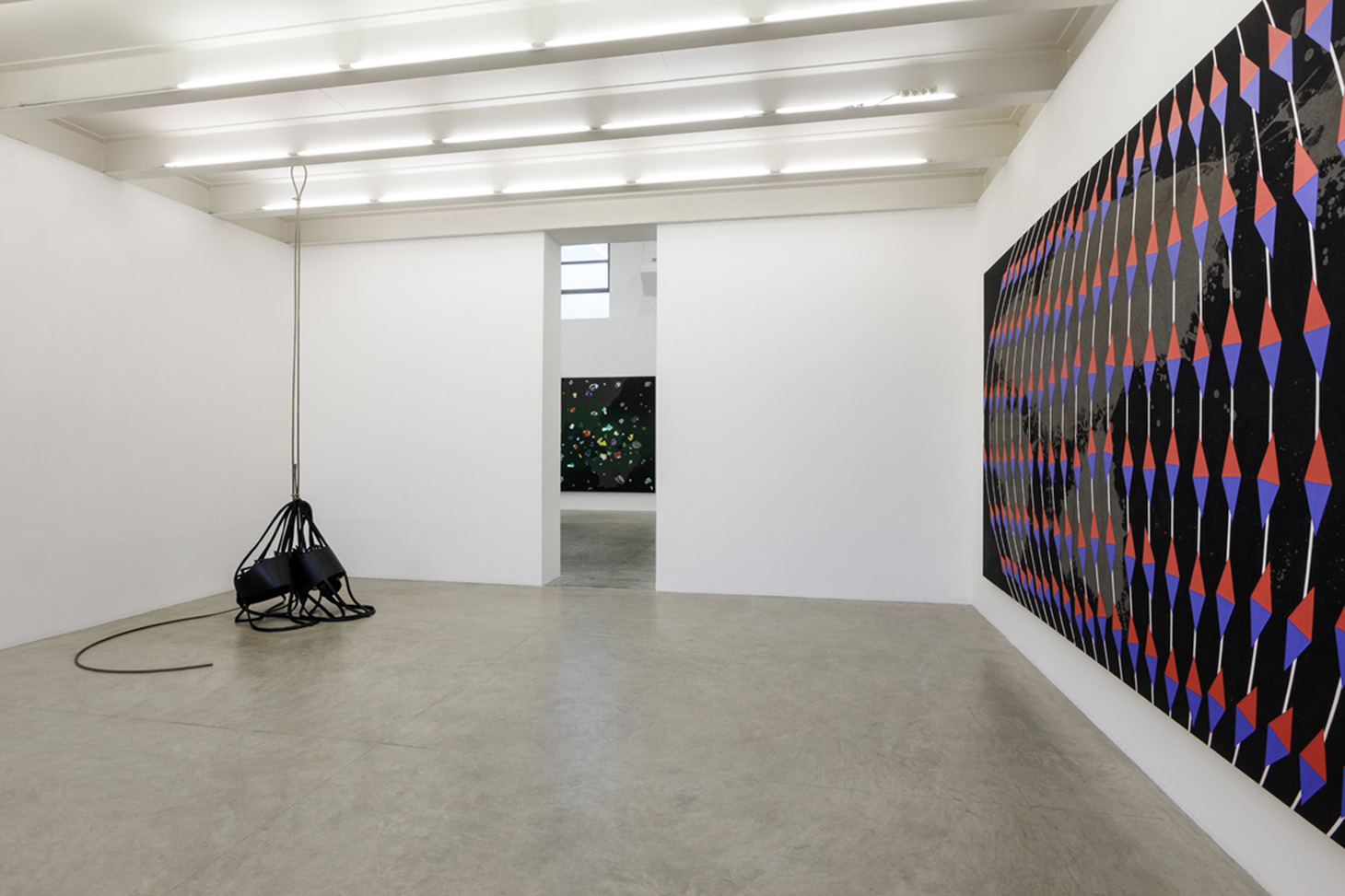 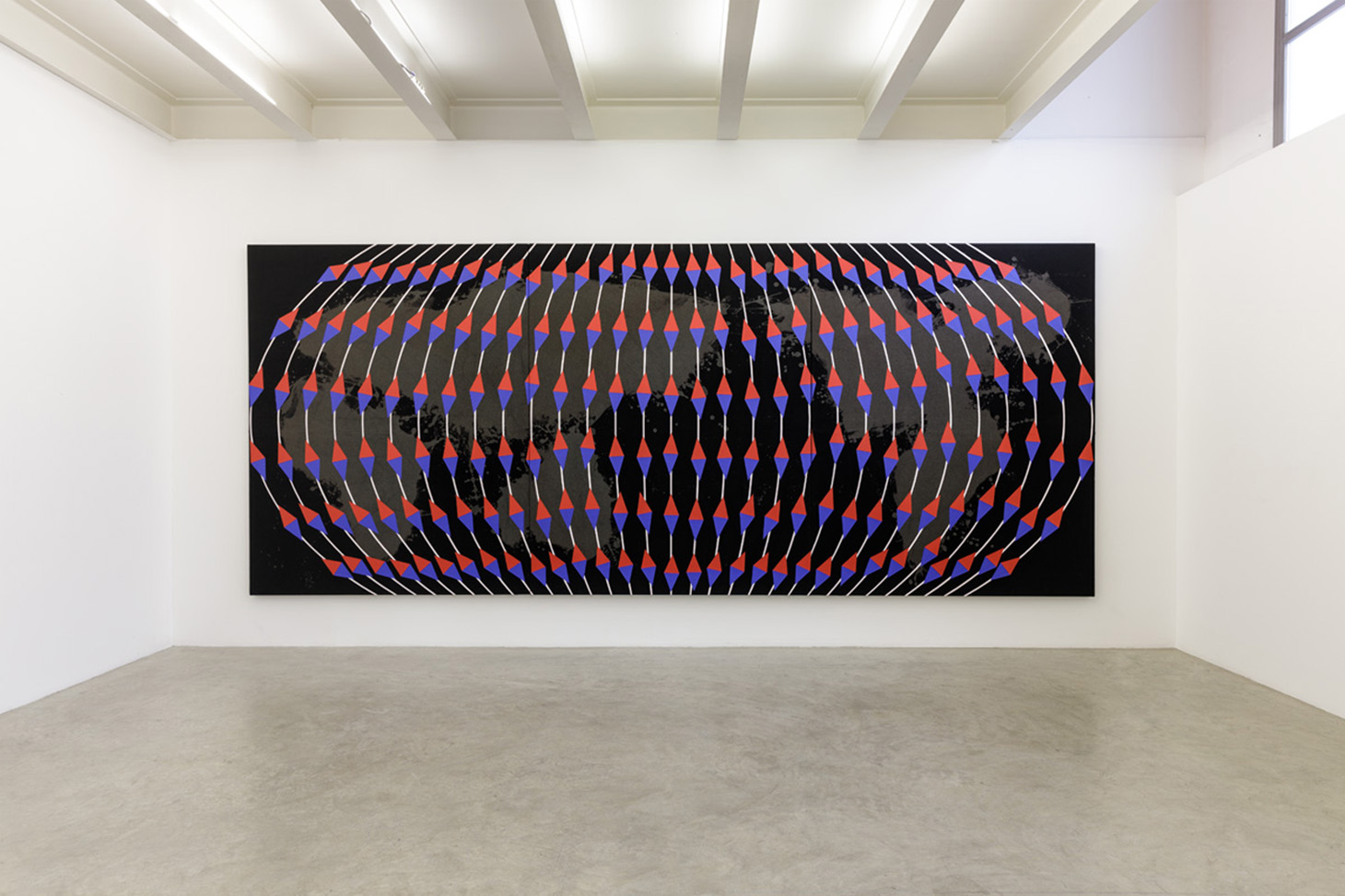 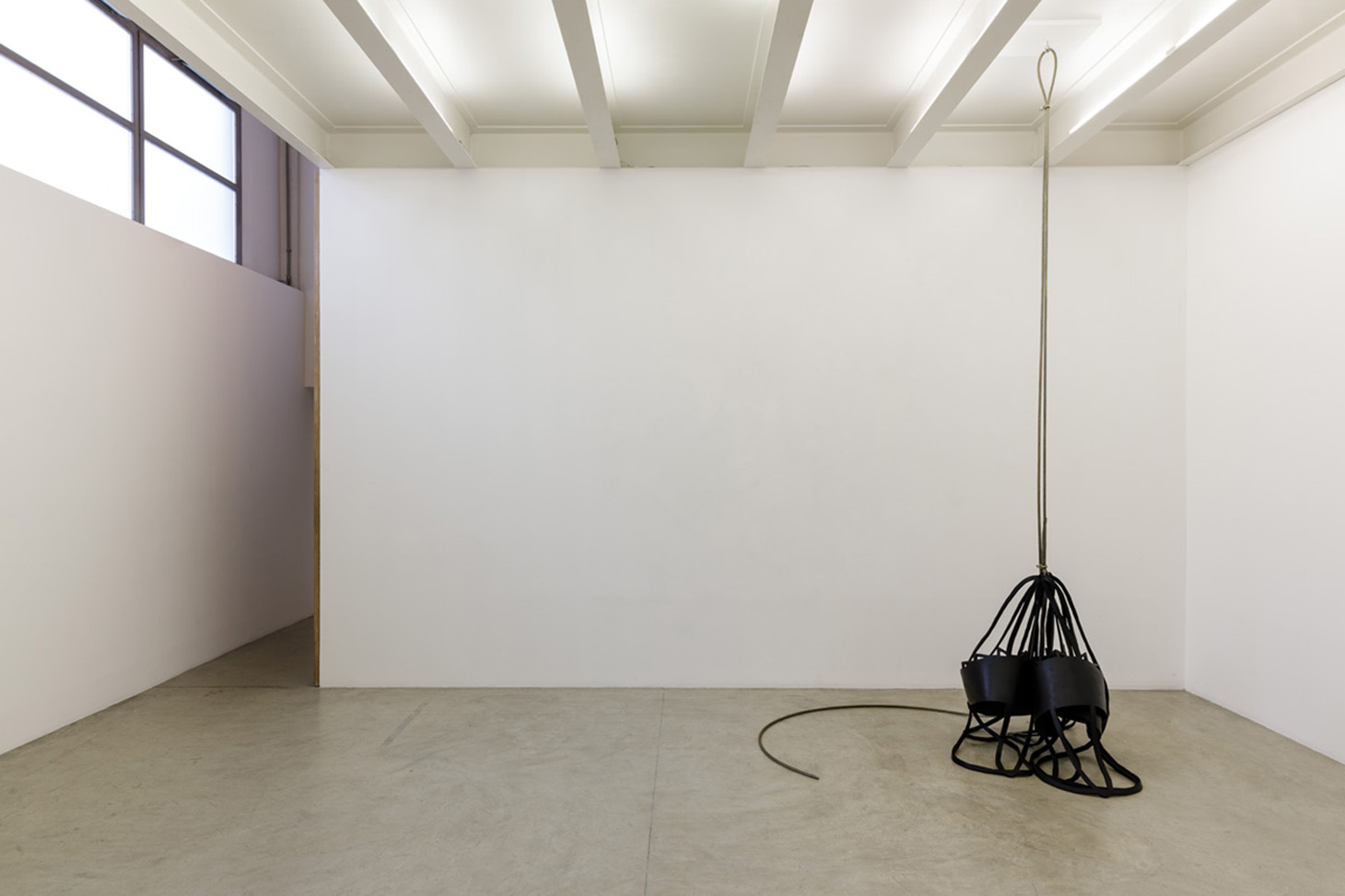 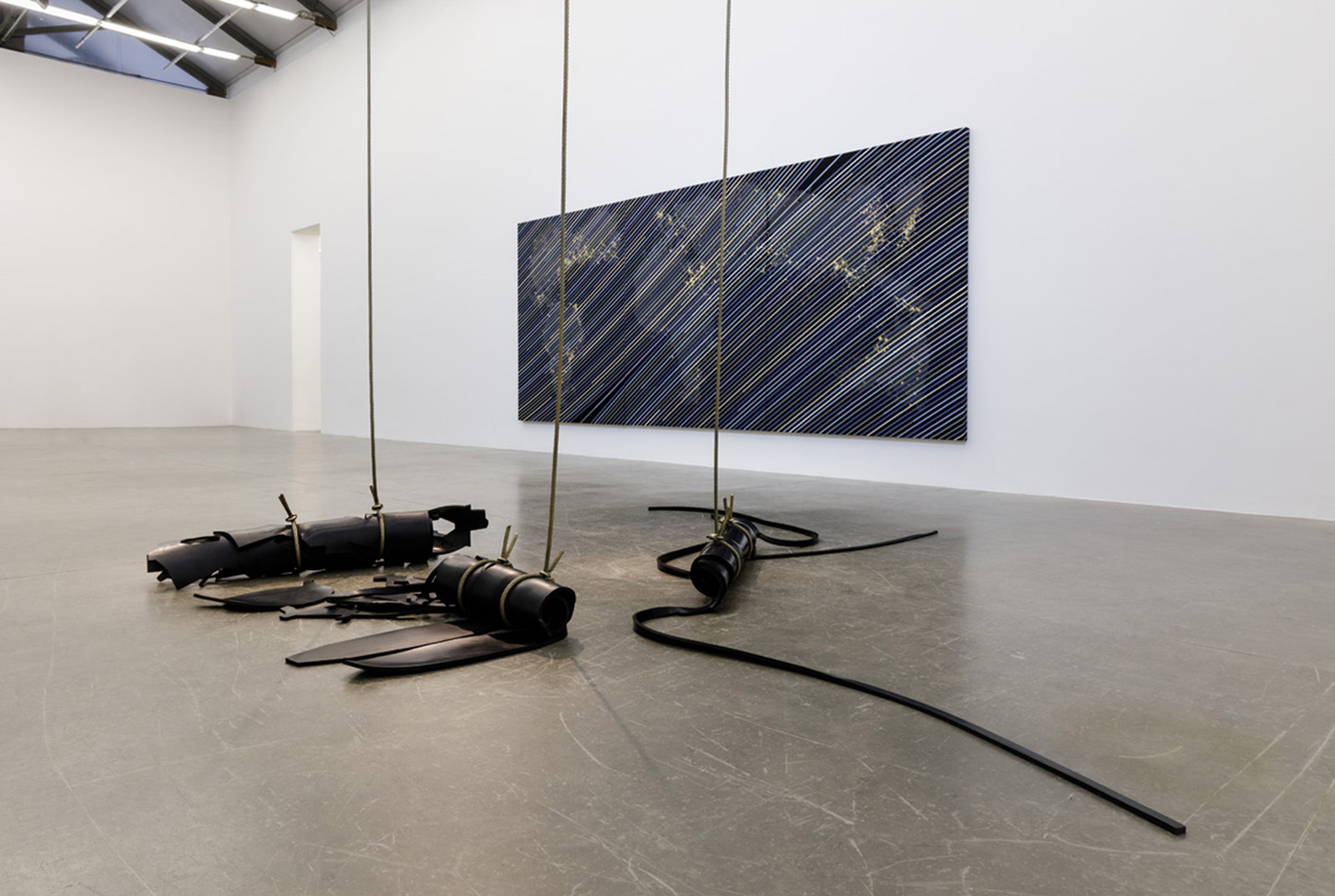 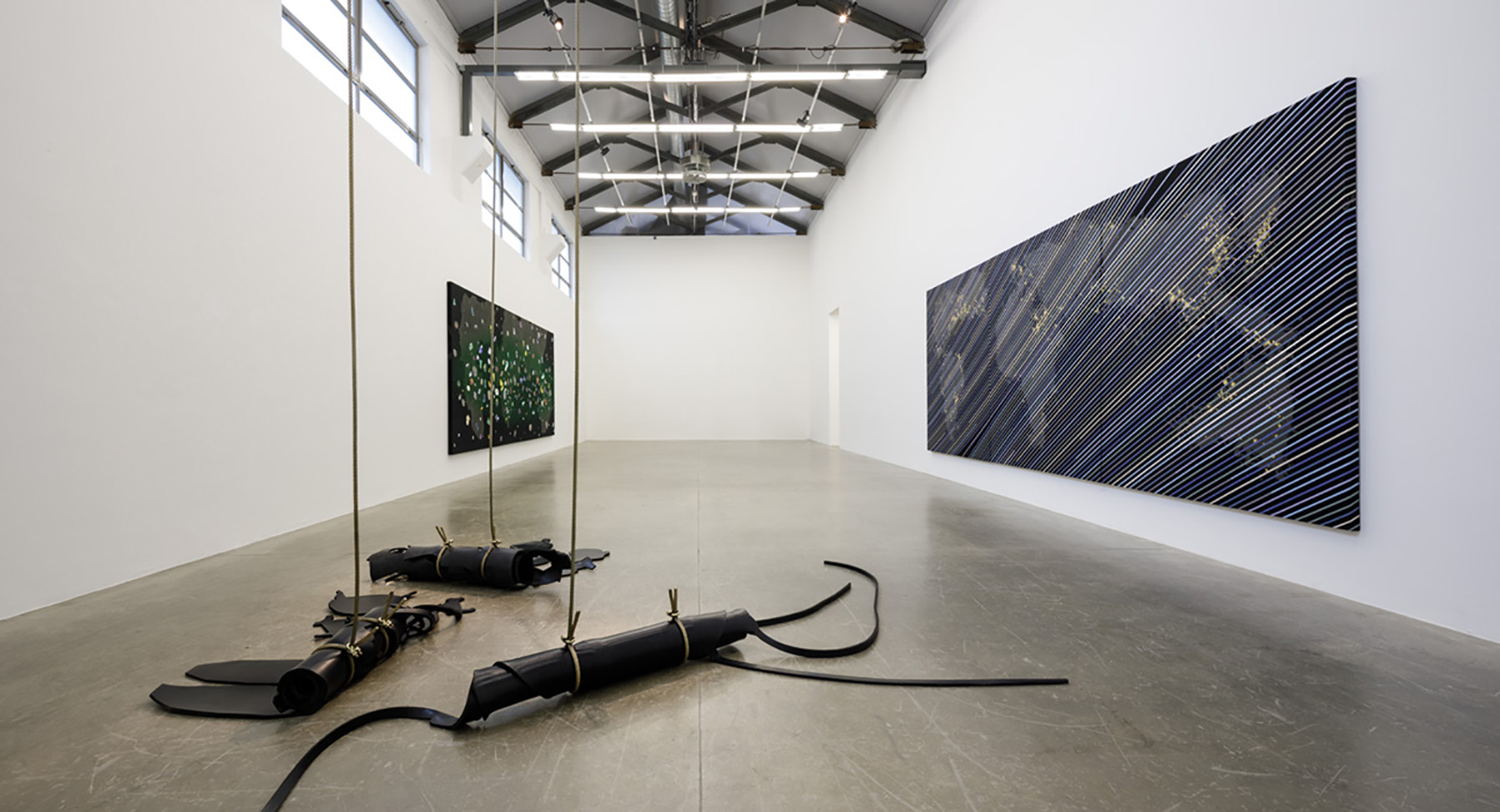 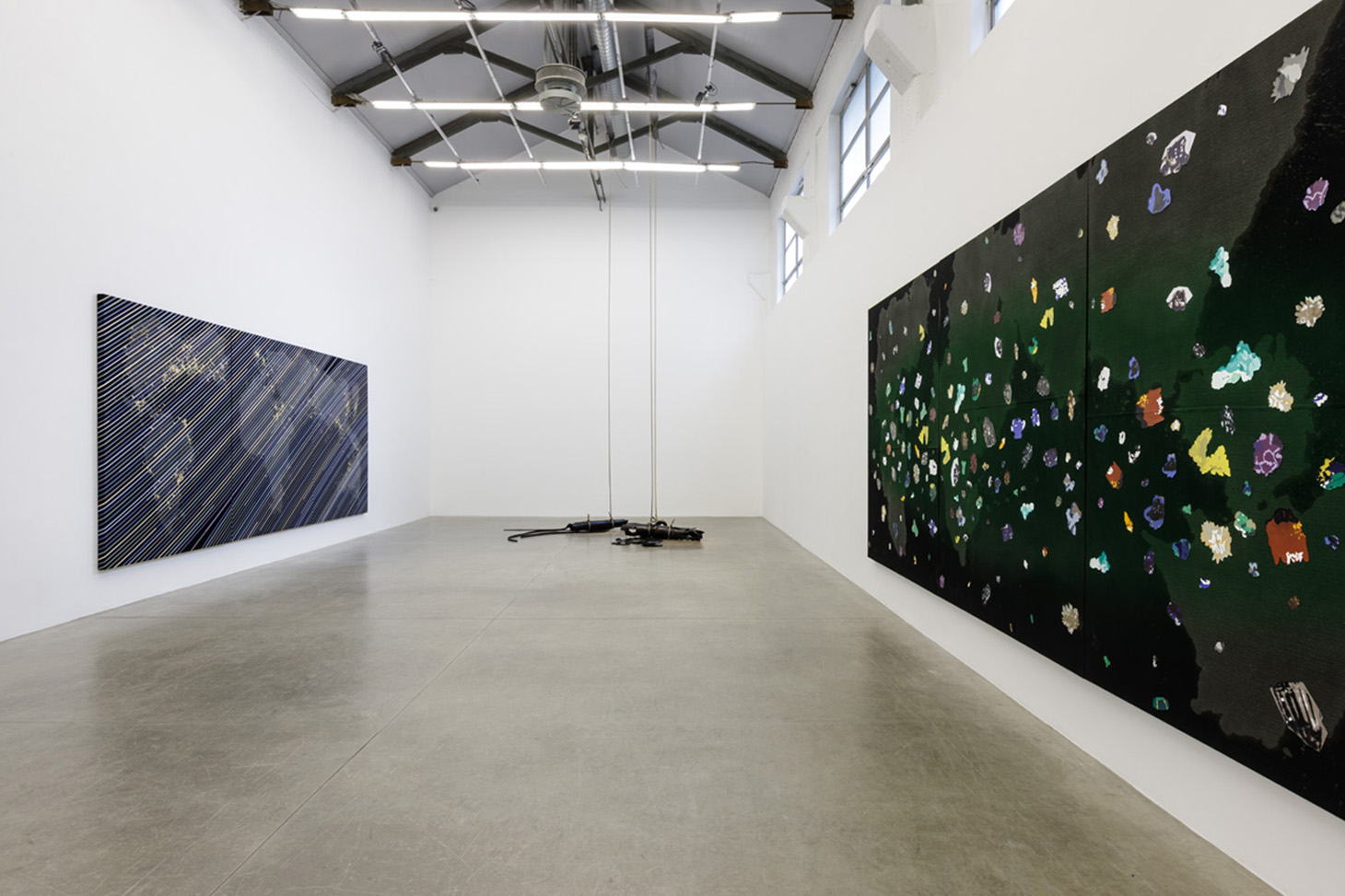 One of the most interesting and versatile artists to emerge out of contemporary China, Xu Qu’s work spans a wide variety of mediums, such as video, painting, sculpture and installation. Preoccupied with confronting the reality of our global world, Xu Qu’s previous work examined the symbolism of money, questioning our obsession with the aesthetics of power relations.

For Chaos, Xu Qu presents a series of eroded acrylic paintings and black rubber soft sculptures, engaging with more existential themes of humanity and deviating from his prior concerns with the harsh reality of our capitalist society. Delving into ideas of space and the universe, Xu Qu has created three sets of paintings, titled Dust, Magnetic Fields, and Star Trail, exploring the imagined view of the Earth taken from the perspective of humans in space. Each painting depicts an illustration of the world map, created by using bleach to permeate the dark canvases. Xu Qu immerses the viewer within the individual and collective world imagined through his eyes. Instead of utilizing precise satellite topography, the maps were drawn from the artist’s personal memory and perception of the world. In Dust, the images of meteorites and dust float on top of the maps. Magnetic Fields depicts the north/south poles of the Earth. In Star Trail, one sees abstract man-made lights and the traces of celestial movements.

The new series of sculptures are titled Sun Gun, Sputnik, Insight, and Voyager 1. The exertion of human presence in the vast unknown of the universe is symbolized through the machine element of a space ship, and Xu Qu riffs on this idea by re-imagining the concept of a shape ship. Using cutouts of the various spacecrafts, Xu Qu utilises black rubber, bundling up the flat pieces with bronzed ropes. Dotted around the exhibition space, the viewer becomes encircled in this playful reconstruction of disparate elements of space, opening up the space into an imaginary mission.

Through this exhibition, the artist plays on the duality of two-dimensional paintings and sculptural installations to examine and question the ways in which the human race perceive this world, and whether the objects we release unto the unknown world become a shadow that shroud us. 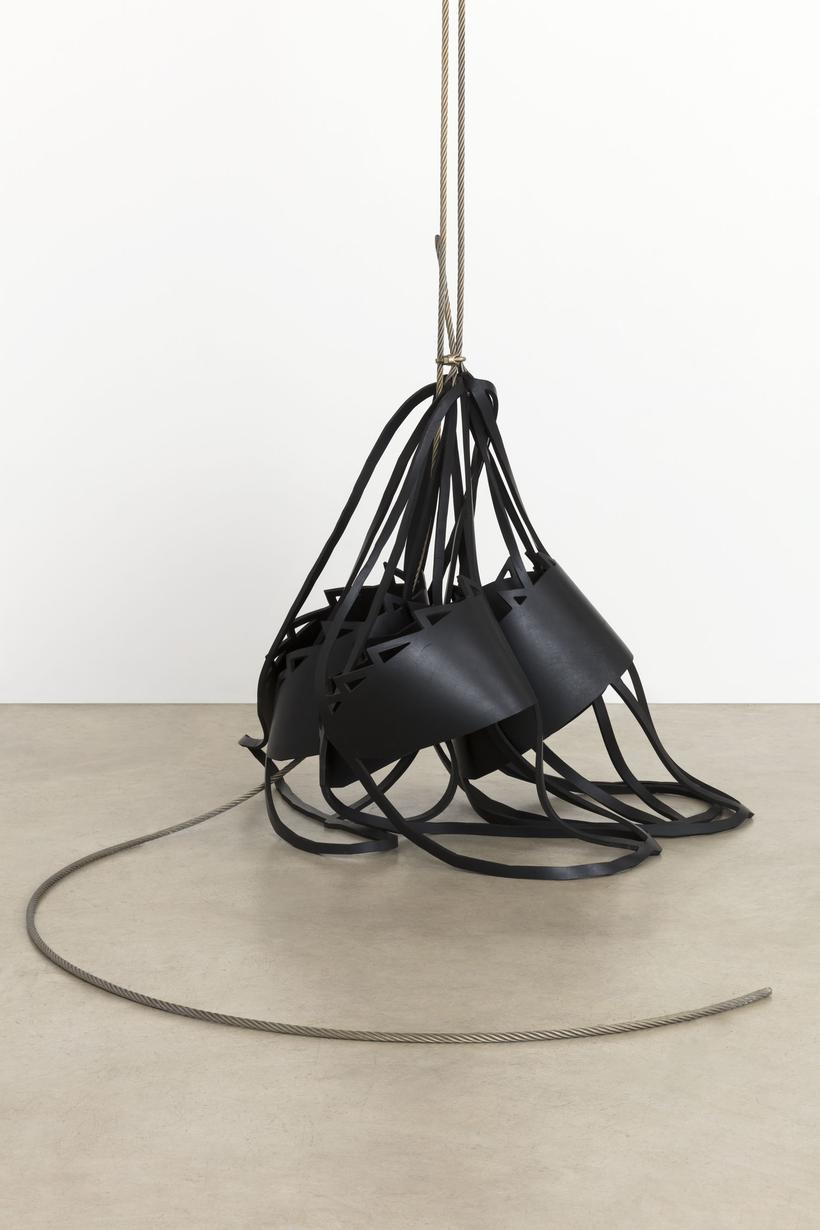 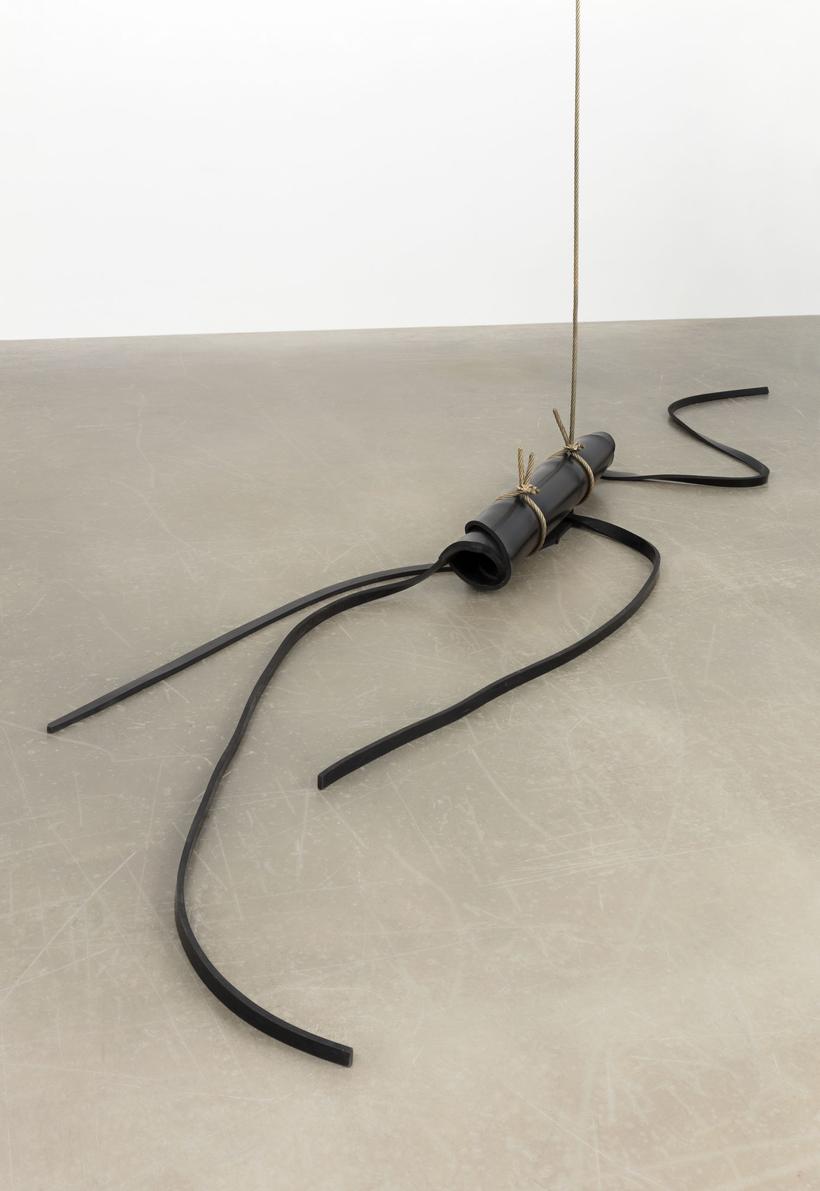 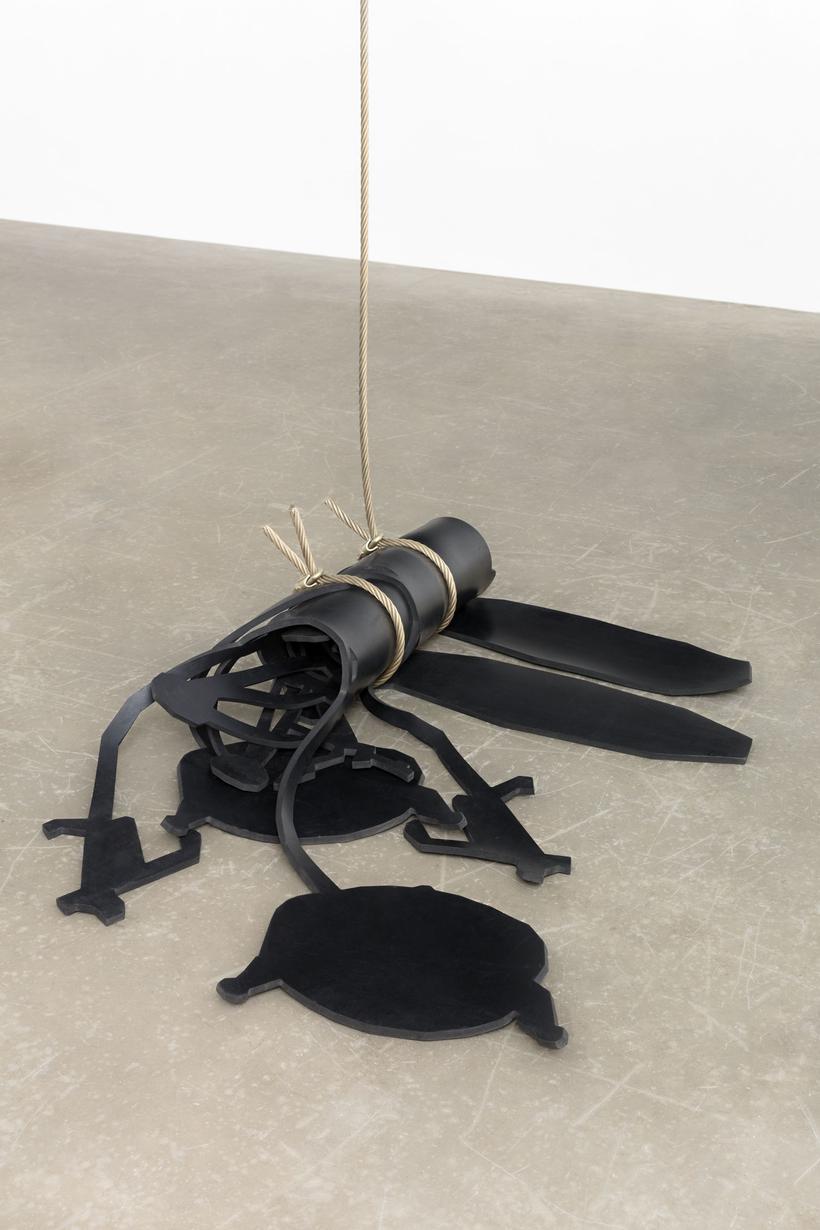 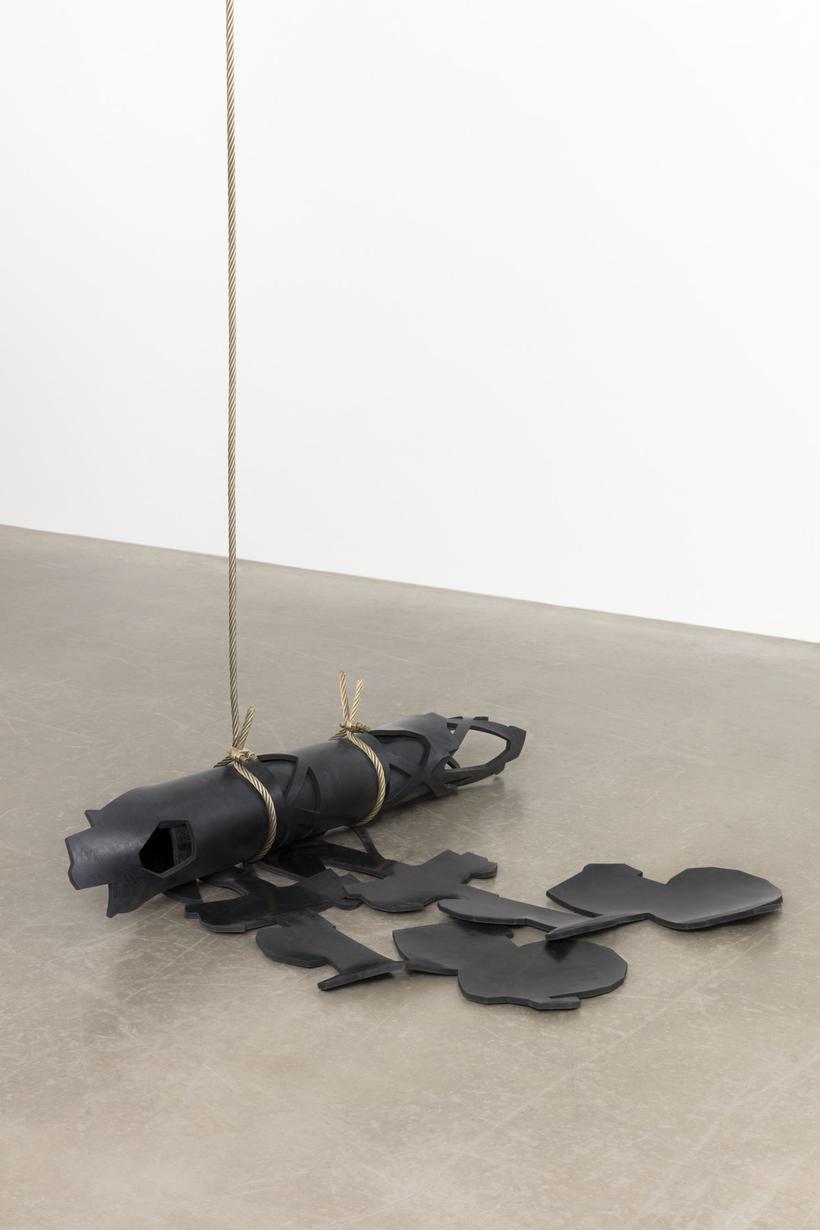